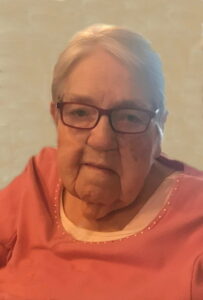 Edith I. Walter, 88, formerly of Lakeville, passed away in her Bremen home on Saturday, May 8, 2021 with her children near.

Born in her family’s home in Walkerton, Indiana on March 15, 1933, Edith was the daughter of Ben Smith Sr. and Nellie Marie (Davenport) Holland. She attended Tyner High School.

On June 24, 1949 in her mother’s Teegarden home, Edith married Chester “Chet” Elmer Walter. Together they would raise ten children; six of their own, two they adopted and two they kept as extra children. They also fostered 100 children in 30 years and touched the lives of each one of them. Devoted to one another for 62 years, Chet would pass on November 21, 2011.

Edith worked for the Lakeville/LaPaz Ambulance Service as a dispatcher for 25 years and on the flower committee for 5 years. She would retire in 2008. Edith was a member of the Ladies Axilliary-Union North in LaPaz.

The family cherished many memories with her camping and at Potato Creek State Park, playing games and having great laughs. She loved being with her family. Edith enjoyed giving of herself and her huge heart. Whether it was a small comfort meal or an event dinner, she was also a great cook.

Funeral services will be held in the church at 11 a.m. on Thursday, May 13, 2021 with calling one hour prior. Pastor Nathan Rosentrater and grandson Pastor Jay Walter Jr. will be officiating. Burial will follow in the Fair Cemetery, North Liberty.

Preferred are memorial gifts in Edith’s name to the church or Center for Hospice Care 112 S. Center St. Plymouth IN 46563.