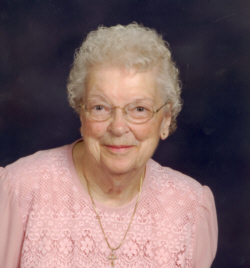 Edith May Hess, 81 of Pretty Lake Trail died at 5:37 a.m. on September 24, 2009 in St. Joseph Hospital, South Bend from complications due to tetanus.
Edith was born on August 30, 1928 in Plymouth, Indiana to Frank E. and Mary Ellen (Eversole) Ritenour. She was a graduate of Lapaz High School with the class 1946.
On February 28, 1946 in Plymouth, Indiana she married Harold F. Hess, he passed away on September 29, 2008.
Edith was a life long resident of Marshall County and a resident of Pretty Lake since 1950.
Edith worked at Sloans Dress Shop for a period of four years. She then worked in quality control for 18 years at Pilgrim Farms retiring in 1986.
She was a member of the Pretty Lake Trinity United Methodist Church and Mary Martha Circle with whom she especially liked to cater meals. She also served as a den mother for the Cub Scouts and as a Blue Bird leader for several years.
Edith loved watching her children, grandchildren and great-grandchildren grow up and celebrating their many achievements. She took delight in watching nature and the activity on Pretty Lake including sometimes enduring canoeing with Harold. Together they loved to watch for the arrival of the snow geese every winter. She delighted in making jellies, breads and other goodies like decorated cakes for her family.
She enjoyed planting flowers and working in her yard. Numerous camping trips took she and Harold to nearly all fifty states. She is survived by her three children: son Lenny and Cathy Hess of Plymouth and their children; Rich (Shelly) Kovacs, Todd Hess, Troy (Heather) Hess, Amber (Jade) Buchanan, and Donnie Adams, son Rod and Sherry Hess of Plymouth and their children; Jeff Hess and Kesha Hess, and son Jerry Hess and his friend, John Carpenter, Houghton, Michigan along with 12 great-grandchildren.
Also surviving is a sister; Edna (Merl) Swihart, Plymouth, a brother; Kenneth (Marie) Ritenour, Bourbon, and two sisters-in-law; Mildred Ritenour of Etna Green and Carolyn Neff of Granger, Indiana.
Edith was also preceded in death by a daughter Sheryl Guyse, a sister Ruth Jackson and three brothers, Andrew, Russell and Elmer Ritenour.
Visitation with the family and the sharing of their memories of Edith will be on Sunday, September 27, 2009, from 3 to 6 p.m. at the Johnson-Danielson Funeral Home.
Friends are invited to celebrate the life of Edith Hess at 10 a.m. on Monday, September 28, 2009, in the Johnson-Danielson Funeral Home, 1100 N. Michigan St., Plymouth. The Rev. Jim Irwin, pastor of the Pretty Lake Trinity United Methodist Church, will officiate.
Burial will follow in New Oakhill Cemetery, Plymouth.
Memorial gifts in Edith’s memory may be made to the Pretty Lake Trinity United Methodist Church.