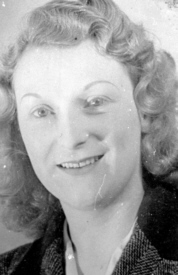 Edna Alice Griewank, 93, and lifetime resident of the Argos, passed away with family by her side at 7:00 a.m. on Wednesday December 14, 2016 at the Life Care Center in Rochester, Indiana where she has made her home since 2003.
Edna was born on August 12, 1923 in Grimsby, England, the daughter of Fredrick Stephen and Elizabeth (Grayson) Potter. Her father served as Head Customs Officer in England where Edna attended private schools and then became a beautician. She arrived in the New York Harbor aboard the Queen Elizabeth on December 17, 1947.
On August 8, 1945, she married Albert Eugene â€œBudâ€ Griewank, in a ceremony that took place in Cleethorpes, England. He preceded her in death on April 15, 2000.
The couple enjoyed traveling extensively yet Edna only returned home to England just once. She prided herself in the art of crafting and enjoyed crocheting and knitting items for others.
Edna is survived by her daughter, Cheryl Ann Harley of Argos and son, Roy S. (Susan) Griewank of Peru; grandchildren: Shawn L. (Michele) Harley of Argos, Heather L. (Fred) Ewing of Rochester and Brandon (Tiffany) Griewank of Winamac; great-grandchildren, Chelsea N. Ewing, Blake R. Ewing, Andrew L. Harley, Dylan Griewank, Brandon Griewank Jr., Mason Griewank and Branson Griewank along with a step-granddaughter Cara Kaszas.
She was preceded in death by her husband.
A graveside service to lay the couple to rest together again will be held in the Spring of 2017 at the Maple Grove Cemetery in Argos.
Memorial contributions can be made to Center for Hospice Care, 112 S. Center St., Plymouth, IN 46563.