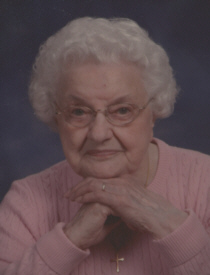 Edna Emma Snyder, 98, passed away at 1:36 p.m. on Monday, June 16, 2014 in the Catherine Kasper Life Center, Donaldson. She was born May 14, 1916, in Chicago, Illinois, the daughter of Prescott Carlton & Hendrietta Marie Ramp Piper, who preceded her in death. Edna married George H. Snyder on April 3, 1942 in Tacoma, Washington. He would precede her in death on February 14, 2006.
Edna worked as a telephone operator before raising her family. She was a member of the Marshall County Historical Society, the Genealogy Society and made Braille Bibles which were sent all over the world.
She was the oldest member of the Calvary Lutheran Church which she joined in 1934. She taught Sunday School for many years and was a member of the Guild.
Edna is survived by her daughters Elizabeth (Donald) DuVall of Pymouth; Judith (Carl) Jeffcoat of Fittstown, Oklahoma; her daughter-in-law Patricia Snyder of Wheaton, Illinois. She is also survived by seven grandchildren: Jeffrey DuVall, Derek Snyder, Joel Snyder, Kenneth Worshman, Steven Worsham, Thomas Kamp II and Tamela Illes; seven great granddchildren and four great-great grandchildren..
She was preceded in death by her parents, husband, her son Prescott C. Snyder, her brother Prescott Carlton Piper and a sister, Dorothy Reaker. Friends will be welcomed by her family to celebrate Edna’s long and happy life on Thursday, June 19, 2014, from 4 to 8 p.m. in the Johnson-Danielson Funeral Home, 1100 N. Michigan St., Plymouth, Ind.
Visitation will also be held for one hour prior to church services on Friday, June 20, 2014, at 11 a.m. in the Calvary Lutheran Church, 1314 N. Michigan St., Plymouth. Rev. Steven Resner will officiate.
Burial will be in New Oakhill Cemetery, Plymouth.
Memorial gifts may be made to the Braille Organization, 1314 N. Michigan Street, Plymouth, IN or to the Calvary Lutheran Church.