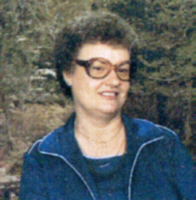 Edna Fay Nissen, 78, a Plymouth resident most of her life, passed away suddenly at 3:44 p.m., Friday, December 14, 2012 in the St. Joseph Regional Medical Center – Plymouth Campus.
Edna was born in Plymouth on September 30, 1934, the daughter of Edgar L. and Bonnie Fay (Hoyt) Ayers. She attended school in LaPaz and at the age of 58 she attained her GED.
On February 17, 1968 in Plymouth, she married Robert N. Nissen who preceded her in death on November 6, 1978.
She worked for a total of 34 years with Wagner Wire, now Lear Corporation in Plymouth and retired in 2007.
Edna was a longtime member of the First Presbyterian Church and loved her pet dog Honey that she rescued from a shelter.
Surviving are two step-daughters; Loretta and husband Kenneth Barr and Patricia Hite all of Plymouth. Several nieces and nephews also survive.
She was preceded in death by her spouse, two brothers; Robert Ayers and Richard Ayers and a sister Betty.
Her wishes were for a simple service and be laid to rest next to her husband in the New Oakhill Cemetery in Plymouth. Services will be held at 11 a.m. Thursday, December 20th in the New Oakhill Chapel with the Rev. Jean Sparks, officiating.
Requested are memorial gift contributions to the First Presbyterian Church, 401 N. Walnut St., Plymouth, IN 46563 or the Marshall County Humane Society, P.O. Box 22, Plymouth, IN 46563.