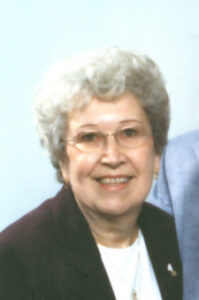 Edna M. “Eddie” Snyder, Plymouth, died at 4:30 a.m. on Sunday, Dec. 2, 2007, in Miller’s Merry Manor, Plymouth. She was 75-years- old.
Born in Winamac, Ind. on August 15, 1932, Eddie was the daughter of Edward and Ethel M. Jones Peters.
She graduated from West High School in 1951 and later took courses at a Secretarial College. She sharpened her skills with continuing educational business courses.
Eddie liked to bowl, raise plants and flowers and watch birds. Her family, especially her husband Jim, was her life.
For nine years, she kept medical records for Saint Joseph Regional Medical Center, Plymouth, retiring in 1999.
On July 8, 1972, Eddie and James Snyder were married in South Bend.
James survives Eddie’s death together with a step-daughter, Rosilee (Tom) Heroy, Richmond, Ind.; a step-son, Jay Snyder, South Bend; two granddaughters, Brandy Bybee, Plymouth, Krishna (Jason) Roler, Warsaw, three grandsons, Adam Bybee, Three Rivers, MI, Jayson (Jenny) Snyder, Granger, Benjamin (Lauren) Snyder, Plymouth, three great-grandaughters, Rachael Pricipie, Kelsey Bybee, Isabelle Marie Snyder, a brother, Roger Peters, Oklahoma and many nieces and nephews.
Eddie was preceded in death by her parents, a sister, Dorothy Broeker, and three brothers, Harold, Raymond and Richard Peters.
Friends are invited to share memories and celebrate the life of Edna “Eddie” Snyder from 4 to 8 p.m. on Tuesday, Dec. 4, 2007, and after 7 a.m. on Wednesday, Dec. 5, 2007, at the Johnson-Danielson Funeral Home, 1100 N. Michigan St., Plymouth, Ind.
Funeral services will be held at the funeral home on Wednesday, Dec. 5, 2007, at 10 a.m. The Rev. Charles Krieg will officiate.
Burial will be in the Sumption Prairie Cemetery, South Bend, Ind.
Memorial gifts to honor Eddie may be made to the Cancer Society, the Heart Association or to Marshall County Hospice and Palliative Care.