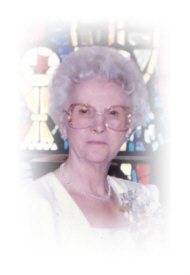 Edna M. McGee, 82, of 15374 U.S. Hwy. 6, Plymouth died peacefully of natural causes at 1:04 p.m. Saturday, June 24th at St. Joseph Regional Medical Center, Plymouth Campus. She has resided at their Polk Township home since 1948 coming from Chicago.
Edna was born on September 15, 1923 to John and Katherine (Zackman) Hoffman in Chicago, Illinois. She received her elementary education at Chicago Lutheran and graduated from Englewood High School in the Class of 1941. Edna was trained in secretarial skills and had worked in downtown Chicago.
On July 29, 1944 in Chicago’s Michigan Avenue – St. Peter’s Lutheran Church, she married Milton A. McGee. A union that fostered nearly 63 years of cherished memories.
Edna was foremost a wonderful homemaker, mother and endearing grandmother. She enjoyed gardening, cooking, baking and sharing with others.
An active member of the Calvary Lutheran Church, Plymouth since 1949, she was involved in the Women’s Guild and the Braille Printing Group. She was also a member of the LaPaz Happy Homemakers Club. She and her family traveled extensively throughout the United States, many times on a meager budget and collected souvenir plates from nearly all 50 states.
Edna leaves her loving family; husband Milton, three sons: John A. and wife Sharon McGee, Wayne M. and wife Cheryl McGee, all of Walkerton and Thomas C. and wife Susan McGee of Plymouth, a daughter: Janis K. and spouse Dan Malicki of Klamath Falls, Oregon along with seven granddaughters: Megan Hellickson, Kari Snyder, Katie McGee, Caitlin Malicki, Tara McGee, Molly McGee and Carlin Malicki, a grandson: Andrew McGee and great granddaughter: Alexis Snyder.
Preceding in death were her parents, a teenage sister Bertha Hoffman and infant twin brothers.
Family and friends will gather at the Johnson-Danielson Funeral Home, 1100 N. Michigan St. Plymouth, from 4 – 8 p.m. on Tuesday, June 27th where calling will continue after 7 a.m. on Wednesday, June 28th.
Funeral services will be held at 10:30 a.m. Wednesday in the Calvary Lutheran Church, 1314 N. Michigan St. Plymouth where friends may call after 9:30 a.m. The Rev. Steven Resner, pastor will officiate. Burial will follow in the Morris Cemetery on U.S. 6 west of LaPaz.
Memorial gifts may be given in Edna’s memory to the church.