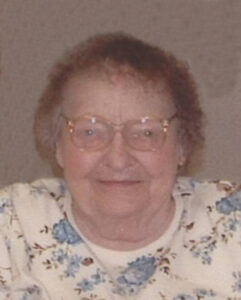 Edna M. Weedling, 99, a former resident of Garden Court East in Plymouth, passed away at 3:10 p.m. Saturday, September 13, 2014 in the Pilgrim Manor Care Center.
Born in Argos, Indiana on February 23, 1915, she is the daughter of Orval and Nellie (Warren) Fear. She received her education at Argos in a one room schoolhouse.
On February 9, 1931 in Warsaw, Indiana she became the bride of Wayne L. Weedling. He would precede her in death on January 14, 1993.
Edna was a longtime member of the Pretty Lake Trinity United Methodist Church.
She enjoyed being a homemaker for her family. Her surviving children are: Walter (Pearl) Weedling, David (Patricia) Weedling, Mary (Ronald) Hite and daughter-in-law Mary Weedling all of Plymouth. Fifteen grandchildren, 40 great-grandchildren, and numerous great-great grandchildren also survive along with many nieces and nephews.
Edna was preceded in death by her daughter Nancy Reichert, son Peter L. Weedling, brothers; Clifford and Jack Fear and sisters; Fawn Fear, Louise Hooker, Marie McClure and Violet Elliott.
Visitation will be held in the Johnson-Danielson Funeral Home, 1100 N. Michigan St., Plymouth on Tuesday, September 16th from 5 – 8 p.m.
Funeral services will be held in the funeral home on Wednesday, September 17th at 3 p.m. officiated by her grandson Steven W. Weedling of Danville, Virginia. Calling will continue after 2 p.m. prior to services.
Memorial gifts may be given to the Pretty Lake Trinity United Methodist Church, 8985 S.R. 17, Plymouth, IN 46563.
Burial will be in the New Oakhill Cemetery, Plymouth.