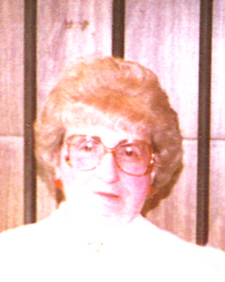 Edna Mae Klingerman, 86, died at 4:51 a.m. at her daughter and son-in- laws, Pattie Jo and Donald DeMunck’s home in Edwardsburg, Michigan, on Tuesday, September 18, 2007.
Born in Plymouth, Indiana, on January 19, 1921, Edna was the daughter of Orval and Della Rush Harris.
On December 31, 1955, in Warsaw, Indiana, Edna and Lewis Klingerman were married. Lewis died on November 9, 1999.
A resident of Plymouth for 79 years, Edna Mae worked at McCord’s as a core builder for 38 years. She retired in 1982.
Her one great love was selling at the Paw, Paw, Michigan, flea market with her daughter. She also enjoyed going to retirees’ dinners every month at Ponderosa.
Edna Mae is survived by her daughter and son-in-law, Pattie Jo and Donald R. DeMunck, Edwardsburg, Michigan, and by four granddaughters. They are: Cindy McKee, Elkhart: Debbie Rivera, Plymouth: Marilyn Hunt, Lumberton, N.C. and Mallisa Clapza, Lumberton, N.C.
And two grandsons, Stonie Ray of Lumberton, N.C., Danny Graham, South Bend survive as well, together with four great- granddaughters, ten great-grandsons, eight great-great- granddaughters and 18 great-great-grandsons.
Edna was preceded in death by her parents, her husband, a daughter, Carol Sue Britt, a sister, Helen Barkmeier and a brother, Harvey Harris.
Friends are invited to share memories and celebrate the life of Edna Mae Klingerman by her family on Thursday, September 20, 2007, from 4 to 8 p.m. and after 7:00 am on Friday September 21, 2007 in the Johnson-Danielson Funeral Home, 1100 N. Michigan St., Plymouth.
Funeral services for Edna will be held in the funeral home at 11 a.m.
on Friday, September 21, 2007. The Rev. Charles Krieg, will officiate Burial will be in the Bremen Cemetery, Bremen, Ind.
Memorial gifts in Edna’s memory may be made to Hospice.