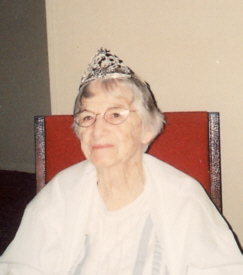 Edna Mae Keyser Couts Keltz Wagoner, 93, of Plymouth, peacefully went to be with the Lord on August 24, 2016. She was at home with her long time friend and caregiver Pati Meyer.
Edna was born on May 10, 1923 in Marshall County to the late Ford Isaac and Eva C. (Lackey) Keyser. Edna graduated from LaPaz High School in 1941. While in high school Edna worked for Indiana Bus Depot as a Tally girl. On January 31, 1942 she married Donald Couts . They divorced in 1956 and she moved to Marion, Indiana, and worked for the World Wesleyan Headquarters in Marion for many years as a bookkeeper. She also baked pies for their cafeteria each day. In 1996 she married Ed Keltz and moved back to Plymouth, helping Ed at his gas station west of Plymouth, until his death, and she also served as Animal Control Officer for Marshall County. Edna then married Orval Wagoner on November 29, 1999 in Plymouth; he preceded her in death on October 12, 2003. Edna enjoyed genealogy, visiting with her friends and family, cooking and baking. She attended Plymouth Wesleyan Church, where she had many friends, Open Bible Church, and Sunrise Chapel. For the last five years, Edna has been cared for by her good friend, Pati Meyer. She is survived by a daughter; Katherine Couts (Michael) Shaffer of Hartford City, a grandson; Paul (Stephanie) Shaffer, great-grandchildren; Timothy Shaffer and Rebekah Shaffer, and numerous nieces, nephews, great nieces and great nephews. She was preceded in death by her parents, three husbands, three sisters; Mary Jo Clouse, Phyllis Elkins, and Margaret Smith. A time of gathering for family and friends will be from 11-1 PM Saturday, August 27, 2016 in the Johnson-Danielson Funeral Home, 1100 North Michigan Street, Plymouth. Serviceâ€™s will immediately follow at 1:00 PM in the funeral home, with Pastor Mary Wood officiating.
Burial will be in the Oak Hill Cemetery.
Memorial contributions may be directed to Marshall County Historical Society, 123 North Michigan Street, Plymouth, Indiana 4653 or to the Marshall County Right to Life, 113 East Washington Street, Suite 2, Plymouth, Indiana 46563.