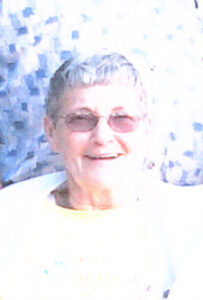 Edna P. McCan, 72 of 10780 Lincoln Highway, was a lifetime Plymouth resident. Edna died in Saint Joseph Regional Medical Center, Plymouth, at 12:56 p.m. on Tuesday, August 28, 2007, following a re-occurring and valiant battle against cancer. Many remember her as the always loyal, cheerful receptionist and bookkeeper –for over 30 years– in the medical offices of Drs. James Robertson and James Kubley.
Edna was born in Plymouth, on December 1, 1934, the daughter of Edgar D. and Edna G. Miller Wright.
She was a 1953 graduate of Plymouth High School.
On February 13, 1954, in the Plymouth Church of the Brethren, Edna became the bride of Herman G. “Jerry” McCan. Jerry died on March 19, 2005.
Edna enjoyed being with her family and watching her granddaughters play softball.
She was a member of the Plymouth Church of the Brethren and a former member of the Eagles Auxiliary.
Edna is survived by three daughters: Debra Hillman and her friend Marty Easterday, Mindy (Eric) Keilman, J.J. (Todd) Sullivan, all of Plymouth; and their children Erin Calhoun, Rachel Hillman, Olivia, Emilee and, Zoe Keilman; Brianne, Marissa, and Sydney Sullivan all of Plymouth.
Three brothers and three sisters survive as well, William E. (Darlene) Wright, Plymouth: Eddie D. (Eileen) Wright, Culver: and Larry W. (Phyllis) Wright, Plymouth, Patsy Jo (Hal) Groninger, Plymouth: Jean Abair, Plymouth and Hilda Green, South Hampton, New Jersey.
Edna was preceded in death by her parents, her husband, Jerry, a brother, Roger Wright and a sister, Audrey Rush.
Friends are invited to share their memories of Edna with her family from 5 to 7 p.m. on Thursday, August 30, 2007, at the Johnson-Danielson Funeral Home, 1100 N. Michigan St., Plymouth. Visitation will continue at 7 a.m. on Friday, August 31, 2007 and for one hour before church services on that day.
Funeral services for Edna will be at 11 a.m. on Friday, August 31, 2007, in the Plymouth Church of the Brethren, 1130 N. Michigan St. The Rev. Ruth Yoder, pastor of the church, will officiate.
Interment will be in New Oakhill Cemetery, Plymouth.
Memorial gifts in Edna’s name may be made to the Plymouth Church of the Brethren or the Plymouth Fire Department.