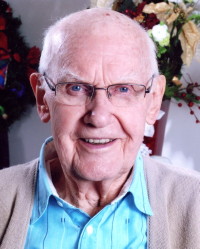 Edward â€œEdâ€ J. Savage, 101, passed away at 10:50 a.m. on Friday, September 13, 2019 at the Catherine Kasper Life Center, Donaldson.
Born in Danville, Illinois on April 18, 1918, Ed was the son of Tony and Esther (Zumar) Savage. He graduated from Roosevelt High School in East Chicago, Indiana.
Ed served for our country in the U.S. Army during WWII until his Honorable Discharge on October 30, 1945.
In East Chicago, Indiana on October 28, 1944, Ed married Helen Saprony. And to this union came two children, Margaret and Joseph. Helen would precede him in death on October 10, 2014, just two weeks away from their 70th Anniversary.
A skilled carpenter by trade, Ed worked for Sinclair Oil Refinery for 35 years until his retirement.
He was a former member of St. Maryâ€™s Church in East Chicago, St. Paulâ€™s Church in Valparaiso and most recently attended Ancilla Domini in Donaldson since 2011.
Ed is survived by his children, Margaret M. â€œPeggyâ€ (John) Oâ€™Rourke of Pittsburgh, PA and Joseph C. Savage of Alamogordo, NM, as well as many nieces and nephews.
He was preceded in death by his parents and siblings: Helen Pramuk and Bernard Savage.
The family will receive friends from 10 â€“ 11:15 a.m. EDT on Wednesday, September 18, 2019 in the Catherine Kasper Chapel, 9601 S. Union Rd. Donaldson, Indiana 46513. Mass of Christian Burial will immediately follow in the church at 11:15 a.m. EDT.
Private family burial will follow in the St. Paulâ€™s Cemetery, Valparaiso.