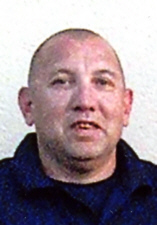 Edward J. Segraves, 51, a former resident of Plymouth, passed away unexpectedly of natural causes in his Warsaw home.
Ed was born the son of Jerry D. and Betty J. (Roberts) Segraves on June 25, 1965 in Portland, Maine. The family moved to the Marshall County area in the mid 1960â€™s. Growing up on a farm Ed had a great interest in horses and enjoyed riding and showing in the 4H Fair.
He graduated from John Glenn high school with the Class of 1983. While there he participated in the baseball program as a catcher and was named three time all-conference and two time all-state. For one year he attended Ball State University and there he played with the practice squad.
Ed continued his love for ball and while a member of the Plymouth Moose Lodge he played shortstop in the menâ€™s softball league. He followed the Reds with Ken Griffey Jr. his favorite player, Notre Dame football and the Pittsburg Steelers.
He had worked in the construction field and enjoyed being a cook at Buffalo Wild Wings in Warsaw. His greatest success in life did not come easy for him or others near to him as he struggled with addiction and then he found Serenity House in Warsaw and there, a renewed life dealing with his own addiction to alcohol. He was able to live an independent life as a born again Christian and gave back by returning to help manage and assist others in the Serenity program, who were making that same journey. Ed was reserved and quiet but when you were a friend you surely knew it. He loved his family especially his son Jacob and cared dearly for his friends and neighbors. Surviving is one son Jacob J.D. Segraves and his girlfriend Bellinda Bottorff of Plymouth, a sister Jo A. (Jim) Kozubik of Knox, close cousins Dixie Segraves and her children; Anna, Toby and Jerry along with cousin Lynn Morris as well as two aunts Paula McClain and Judy Pendexter.
He was preceded in death by his parents and uncle Robert Segraves.
Family and friends are invited to gather at the Johnson-Danielson Funeral Home 1100 N. Michigan St., Plymouth on Tuesday, November 1st from 5 â€“ 7 p.m. A memorial service will begin at 7 p.m. in the funeral home.
Memorial gifts may be made to the family or Serenity House, Inc. 321 South High Street Warsaw, Indiana 46580.