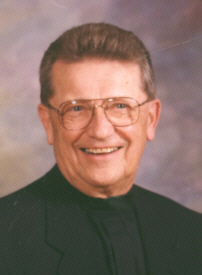 Edward Julius Krason, 87, passed away Monday, March 25, 2013 at his residence in Maria Center apartments, a part of The Center at Donaldson sponsored by the Poor Handmaids of Jesus Christ in Donaldson, Indiana. He has made his home there since 2003 and was a former resident of St. Paul’s Retirement Center in South Bend.
He was born on the Southside of Chicago on February 20, 1926, the second son of John J. and Mary F. (Lipa) Krason. He joined an older brother Thaddeus and later came his brother John who died at the age of five. Edward was baptized in St. John of God Roman Catholic Church in Chicago.
He started school at St. John’s grade school, run by the Felician Sisters. He attended Gage Park High School which he completed in 1944 and then joined the United States Navy. Three months later he was given a medical discharge.
Edward’s first job while in high school was a stock-room employee for Sears, Roebuck and Co. on Western Ave. and 62nd Street in Chicago. He worked into the delivery department and later sales until 1950.
At the same time he was taking undergraduate classes at DePaul University’s downtown campus. He started off studying accounting but later transferred his major to Liberal Arts/Education. He also took Philosophy courses from the Dominican priests.
It was not all work and no play, as Edward truly enjoyed ballroom dancing, bowling and roller-skating. He read extensively and had a great appreciation of music.
He had a dream of combining his teaching skills with a deep desire to become a priest, but was often discourage because he was “too old”. He persevered in his dream and at the age of 32, admittedly older than most, Edward was ordained as a Roman Catholic priest on February 3, 1958 by Bishop Leo A. Pursley.
As a Priest of the Fort Wayne, South Bend, IN diocese, he ministered at the following assignments in Ft. Wayne; St. Jude’s parish, Central Catholic grade and high schools, Queen of Angels parish, St. John the Baptist Parish, principal of Bishop Dwenger High School, CCD Fort Wayne Area Director and Pre-Cana Director. He also served at S.S. Peter and Paul Catholic Church and Huntington Catholic High School in Huntington, Indiana, St. Mary’s parish in Decatur, St, Joseph’s parish in Garrett and St. John the Evangelist parish in Goshen. The following family members survive him: his sister-in-law; Lena Krason of Brookfield, Illinois, nephews and nieces; Mark E. (Kathy) Krason of Lansing, Illinois, Ted E. Krason (and Valarie Pehler) of Brookfield, Nanette M. (Ron) Brija of Brookfield, Melanie A. (Jim) Sloane of San Jose, California; one great-niece and five great-nephews. He had a great appreciation for his family; and the Community of the Poor Handmaids of Jesus Christ, which he called home.
Visitation for Edward Julius Krason will be held on Tuesday, April 2nd from 9:30 – 10:30 a.m. EDT in the Ancilla Domini Chapel, 9601 Union Road, Donaldson. A Mass of Christian Burial will be held immediately following at 10:30 in the Chapel. The Rev. Fr. John Pfister, pastor of St. Mary Church in Huntington will celebrate the Mass.
Burial will follow later that afternoon in the Resurrection Cemetery in Justice, Illinois.
Memorial gifts may be made to the Poor Handmaids of Jesus Christ Ministries, P.O. Box 1, Donaldson, IN 46513.