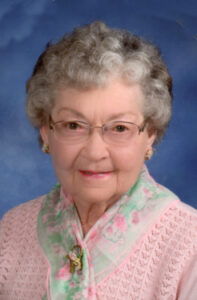 Eileen Mae Quivey, 90, a resident of Fairfield Garden Ct., Plymouth passed away unexpectedly Wednesday morning in the South Bend Memorial Hospital of natural causes.
Eileen was born in Plymouth on December 27, 1925 at the home of her parents; Alfred L. and Vonnie V. (Seider) Rogers. She graduated from West High School in the Class of 1944. While active in Rural Youth, she met Hugh A. Quivey and the two were married in the Poplar Grove Church on June 15, 1946. Together they established a dairy and sheep farming operation north of Plymouth where they raised their four children with strong family ties. Eileen enjoyed being a homemaker and assisting on the farm. She maintained a large garden, was an excellent cook and looked forward to family get-togethers. They themselves were involved in County, State and National Holstein activities and supported their children serving as 4H leaders and LaVille Band Boosters. They worshiped together at the Trinity United Methodist in Plymouth where Eileen and Hugh sang in the choir. After 58 years together, Hugh preceded in death on May 21, 2004. Eileen a devoted member for now over 60 years, had taught Sunday school and remained involved in United Methodist Women’s groups. She was always involved in Fairfield social activities and as a sports fan she often watched Purdue, the Colts, Pacers and Bears.
Eileen is survived by her four children: Jan A. (Gerri) Quivey of Culver, Dale D. Quivey of Merrillville, IN Diana L. (Tom) Cook of Elkhart, IN and Marilyn K. Terew and friend Dale Bunch of Pittsboro, IN. Eight grandchildren also survive. They are: Jan’s children, Matthew Quivey and Jessica (Christopher) Garcia; Dale’s children, Brent, Marissa and Carson Quivey; Diana’s daughter, Candace (Matt) Nelson and Marilyn’s sons, Michael Vaughn and Christopher (Erin) Vaughn along with four great-grandchildren and several nieces and nephews.
Preceding in death was her spouse, three brothers; Ernest, Robert and Lowell Rogers, two sons-in-law; Randall Vaughn and Vincent Terew along with several sisters-in-law and brothers-in-law.
Visitation will be held on Sunday, January 17th from 2 – 5 p.m. in the Johnson-Danielson Funeral Home, 1100 N. Michigan St., Plymouth.
Funeral services will take place at 11 a.m. on Monday, January 18th in the Trinity United Methodist Church, 425 S. Michigan St., Plymouth with Pastor Mark Need officiating. A luncheon and time of sharing will immediately follow in the fellowship hall.
Eileen will be laid to rest next to Hugh in the New Oakhill Cemetery, Plymouth.
Preferred are memorial gifts to the church.