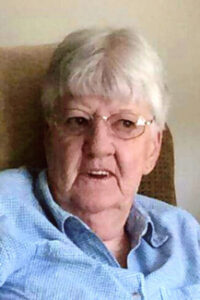 Eileen R. Stepp, 81, a Plymouth resident for over 20 years and formerly of Pennsylvania Avenue, passed away at Signature Healthcare of Bremen on Saturday, December 20, 2014.
Born in Emington, Illinois on December 17, 1933, Eileen was the daughter of Thomas J. and Marie C. (Combs) Larkin. Her family moved to Kewanna, Indiana where she graduated from Kewanna High School with the class of 1953. They then moved to Winamac and then to North Judson in 1961. Eileen worked as a secretary for the North Judson/San-Pierre school system for 31 years until her retirement in 1993, when she decided to settle in Plymouth. She then worked part-time for Work One Express for a few years. She was a member of St. Michael’s Catholic Church in Plymouth, serving as a greeter and in the Care Women International Just Born, crocheting blankets for newborns. She enjoyed crocheting for her family, crafts, reading and going to BINGO at Wal-Mart. She treasured times with her family and friends.
Eileen is survived by her three daughters and children: daughter Pam S. Julian & Jack of Bourbon and her children; Chad (Amber) Stepp and Julie Fulk, daughter Joy D. (Darrell) Smith of North Judson and children; Renae (Tony) Lukac and Ryan Smith, and daughter Jill E. (Dallas) Hester of Reynolds, IN and children; J.J. (Kristy) Boisvert, Jenna (Courtney) Good, Jared Oglesbee & Mikayla and Nikki Stepp & Buddy. Her siblings are: Maxine Bardsley of Rochester, IN, Elaine Rans of Kewanna, Pat (Harold) Foust of Rochester and Carol (Bill) Earnest of Logansport. Also surviving are the 8 grandchildren, 13 great-grandchildren and many step-grandchildren and step-great-grandchildren.
She was preceded in death by her parents, son Jimmy Stepp and son-in-law Ray Smith.
A memorial service will be announced at a later date.
Inurnment will be in St. Jacob’s Catholic Cemetery, North Judson, IN.
Preferred are memorial gifts to St. Michael Catholic Church, 612 N. Walnut St., Plymouth, IN 46563 or American Institute for Cancer Research 1759 R. St. N.W., Washington, D.C. 20009