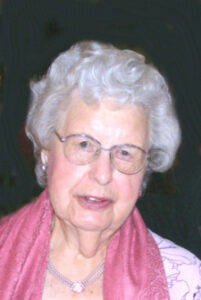 Elberta M. Davis, 96, died of natural causes at the Catherine Kasper Home, Donaldson, Indiana, at 8:30 p.m. on Sunday, March 14, 2010.
Elberta was born in Hebron, Ind., the daughter of Charles L. and Hazel Miller Ginder on June 26, 1913. She was a senior at West High School, class of ’32, when, on a blind date, she met and fell in love with a tall, good-looking boy, George Davis. They were married in a simple home ceremony on June 16, 1935. They lived in Albion, Mich., where George had a job working in the parts department of a Chevrolet garage.
After a year they came back to Plymouth where George worked at the Bear Cat Store, and in 1939, bought out Delmas Whitsell’s Marathon station. Elberta worked there too, even with one child, Betty (Mrs. Robert Thompson) and another on the way, Marilee (Mrs. Chuck Johnson).
In 1944 George joined the Army and served for two years. Elberta was very proud of George’s service and managed to take care of the Marathon station and her family. The stories of Elberta’s trip to Oklahoma to live near the base alone with her girls, when she had barely left home before, impressed all of her grandkids. Her determination to keep her family close together, no matter the means, is a lesson kept by her family today.
Shortly after the service George and Elberta opened their own business, the Davis Brake and Wheel Company, where for the next 20 years they served the people of Marshall County. In 1947, their son, Jack, was born and in 1951, a second son, David, joined the family.
Elberta loved to travel and after George’s retirement in 1977 they bought a travel trailer. For the next dozen years, they spent the winters in Okeechobee, Fla. Wherever they traveled they made new friends and always enjoyed hosting their children and grand children on family vacations. Regardless of where Elberta and George were, their family and friends were welcome and a big part of their lives. To understand Elberta was to know that her compassion and love had no limit, evidenced by what a large impression she had on every one of her children and grand children. They remember their mother / grandmother / great grandmother as a woman that loved to cook and wouldn’t hesitate to feed you on a moment’s notice when stopping by to visit. Her meals were loved by many, especially her famous homemade chicken noodles and peanut butter pie. These recipes that she personally taught to many of her grandchildren are still the favorites at family gatherings. Regardless of the crowd or what was in the fridge, she could prepare a feast for everyone and no one would go away hungry. As her family grew so did her love. She was always interested in how everyone was doing, keeping track of careers, school, basketball games, or who had a cold this week, always placing others needs over her own. Her worry about all the activities in her grandkids’ lives seem comical when considering the amenities today in comparison to her years of motherhood, but that was Elberta. Never seeming to waste a moment while not cooking and caring for family, she filled her time sewing and quilting. In recent years she finished her final quilt for her youngest grandchild, having made each of her grandchildren a much cherished quilt for their weddings. Outside of friends and family she was a strong Democrat and a die hard Cub fan, often staying up through the night to watch the end of a game. While her political views were strong her friendships were stronger. As she said, “We had a lot of good Republican friends!”
A member of the First United Methodist Church for over 40 years, Elberta had 50-year pins as a member of the Order of the Eastern Star, Chapter 26. She was also a member of the VFW Auxiliary.
George and Elberta were married just over 63 years. He died on July 5, 1998. Age brought her much wisdom. She knows how marriages endure: “You have to live within your means, you both have to give in, and you have to love each other, ‘till death do you part.”
Elberta is survived by four children, twelve grandchildren and 32 great-grandchildren.
Betty and Robert Thompson, Rochester, and their three children: John Thompson (Songa Yin, friend), Ft. Wayne, Bill (Esther) Thompson, Plymouth and Sara (Mark) Stukenborg, Clemmons, N. C.
Marilee and Charles Johnson and their son Jamie (Chris) Plymouth.
Jack and Mary Kay Davis and their children: Eric (Melanie) Davis, Lafayette: Matt (Julie) Davis, Denver: Krysta (Mike) Magee, Plymouth: Nate (Rachell) Davis, Plymouth, Elizabeth (Brian) Wray, Plymouth and Kyle Davis (Sarrah Van Sickle, fiancée), Lafayette.
David and Becky Davis and their two children: Katie (Phil) Rabe, Greenville, S.C. and Jared (Rene) Davis.
She is also survived by a sister, Jean Hoover, Warsaw, Ind. and a brother Max Ginder, Plymouth.
Elberta was preceded in death by her parents, her husband, a brother Milford Ginder, a sister Annabelle Whitesell, and a great grandson Michael Noel Magee. Friends are invited to celebrate the life of Elberta Davis on Wednesday evening, March 17, 2010 from 5 to 7 p.m. at the Johnson-Danielson Funeral Home, 1100 N. Michigan St., Plymouth, Ind.
An Eastern Star Service will begin at 7 p.m.
Funeral services for Elberta will be held at 2 p.m. Thursday at the Plymouth First United Methodist Church, 400 N. Michigan St., with additional calling two hours prior to the services. The Rev. Dr. Dean Fager will officiate.
Burial will be next to her beloved husband in the New Oakhill Cemetery, Plymouth.
Memorials in Elberta’s name may be made to the church or to a charity of the donor’s choice.