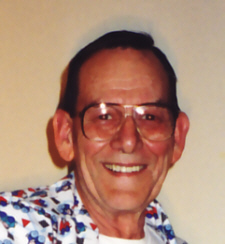 Eldon “Gene” Huff, 80, a lifetime Marshall County resident, died of natural causes at 2:27 p.m. on Thursday, July 31, 2008, at his residence in Plymouth.
Gene was born in Bremen on April 16, 1928, the son of Floyd and Mabel Heckaman Huff. He graduated from LaPaz High School with the class of 1946.
Gene and Patricia A. Tekulve were married on September 26, 1948, at St. Michael Roman Catholic Church, Plymouth. Pat died on December 31, 2005.
Gene was a U.S. Army Veteran of the Korean Conflict.
He had worked several places, including Studebaker’s, F.W. Means, the Post Office and McCord’s, from where he retired.
Gene loved being with his family, especially his grandchildren. He was a lifetime member of the Bremen Masonic Lodge #414, and the Plymouth V.F.W. Post # 1162, where he had been Post Commander. He was very proud when he was able to be active in the Military Graveside Rites of his comrades.
Gene is survived by three sons and a daughter, all of Plymouth. His children are: Debbie A. and Michael Fall; Kevin E. and Susan S. Huff; Bruce Huff and Brian and Lisa Huff.
Nine grandchildren also survive. They are: Jeremy Roose, Michigan City, Ind.; Catherine and Michael Mattern, Plymouth, Ind.; Megan and Joshua Hammond, Argos, Ind.; Andy and Sarah Huff, Kalamazoo, Mich.; Craig Huff, Plymouth, Quinn and Heath Bowman, Plymouth, Casey Fall, Bloomington, and Ariel Huff and Daryl Huff, Plymouth.
Two great-granddaughters: Landrie Mattern and Avery Bowman, both of Plymouth, and a great-grandson, Addison Hammond of Argos, also survive, as well as a brother, Jacob Huff of Hendersonville, TN. Gene was preceded in death by his parents, his wife Pat, one sister and five brothers.
Friends will be welcomed to celebrate the life of Gene Huff on Sunday, August 3, 2008, from 4 to 7 p.m. and after 7:00 a.m. Monday, in the Johnson-Danielson Funeral Home, 1100 N. Michigan St., Plymouth, Ind. A memorial service by the Bremen Masonic Lodge # 414 will be held at 7:00 p.m. on Sunday in the funeral home. Funeral services, officiated by the Rev. Charles Krieg, will be held for Gene in the funeral home on Monday, August 4, 2008, at 10:30 a.m. Burial will be in New Oakhill Cemetery, Plymouth.
Memorial gifts in Gene’s memory may be made to the Center for Hospice and Palliative Care, 112 S. Center St., Plymouth, Indiana 46563.