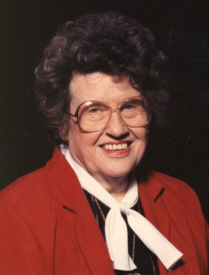 Eleanor Roush, 95, formerly of Baker Street, passed away at 3:50 a.m. on Saturday, July 6, 2013 at Miler’s Merry Manor, Plymouth.
Born in Ridgeway, Illinois on August 31, 1917, Eleanor was the third child of Benjamin L. and Emma L. (Baldwin) Trousdale. She graduated from Ridgeway High School.
After moving to Plymouth in 1944, she met Harold E. Roush. Harold took Eleanor to be his wife in Knox, Indiana on September 30, 1944. He would precede her in death in January of 1992.
She and Harold moved to South Bend in 1951 where she worked at Lerner’s in the downtown shopping area. In 1959 they moved back to Plymouth.
Eleanor loved working for J.C. Penney as a sales clerk for 23 years until the uptown store closed and she retired in 1990. She spent her retirement years living at River Park before going to Miller’s Merry Manor.
She was a longtime member of the Blissville Church of the Brethren and then the Plymouth Church of the Brethren.
She is survived by her four children: John Abell of Granger, James (Gloria) Roush of Cassopolis, MI, Beverly (Mrs. Fred) Wolfarth of Indianapolis, and Donna Brinkman of Dayton, OH; 16 grandchildren; 16 great- grandchildren and 2 step-great-grandchildren complete her family. She was a fond and loving mother to the children of Harold Roush.
Eleanor was preceded in death by her parents, her husband, Harold, son-in-law, Jerry Brinkman, and her four siblings.
Visitation will be from 10 – 11 a.m. on Wednesday, July 10, 2013 in the Plymouth Church of the Brethren, 1130 N. Michigan Street, Plymouth. Funeral services will immediately follow in the church with Pastor Ruth Yoder officiating.
Burial will be in the Westlawn Cemetery, North Liberty.
Memorial contributions can be made to Plymouth Church of the Brethren, 1130 N. Michigan, Plymouth, IN 46563.