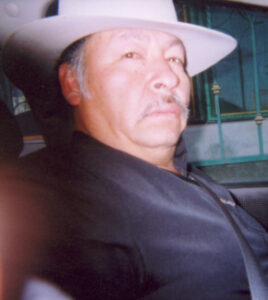 EN MEMORIA ELIAS VACA
Fecha de Nacimiento
19 de Abril 1950
Fecha de Fallecimiento
24 Diciembre 2011
SERVICIO
21 de Enero 2012
a la 1:00 de la turde La Iglesia Catolica de Santo` Miguel
Elias Vaca, 61 of Plymouth, passed away December 24, 2011 in Capitiro Guanajuato, Mexico from a brief illness. Elias died as he had wished, in his hometown in Mexico, with his loving wife, family and friends at his side. He was born in Mexico on April 19, 1950. On February 14, 1994, he married Rafhaela Fuentes who survives. He is also survived by his mother; Delores Vaca and his sisters; Maria and Lamor Vaca who reside in Capitiro Guanajuato and a brother Rafael Vaca of Plymouth as well as two sons; Elias Vaca Jr. and Troy Vaca, three daughters; Maria Vaca, Melissa Vaca both of Plymouth and Elizabeth Vaca of Illinois. Two step-daughters; Jassicia and Carol Balboa and a step-son, Hector Balboa all reside in Plymouth. He has sixteen grandchildren, seven step-grandchildren and two great-grandchildren.
His father; Jesus Vaca preceded him in death as did his brother Javier Vaca, both from Mexico.
Elias had worked a total of 37 years for the Read Family at the Plymouth Fertilizer Plant now Field’s LTD prior to his illness. A gathering of family and friends will take place at the Vaca residence on Thursday, January 19th and Friday January 20th from noon until 5 p.m. located at 400 Nursery Street in Plymouth.
A Mass in Memoriam will be held on the sixth anniversary of brother Javier’s death, this Saturday, January 21, 2012 at 1 p.m. in St. Michael Catholic Church, 613 N. Center St., Plymouth. The Spanish Mass will be offered by Fr. Eloy Jimenez.