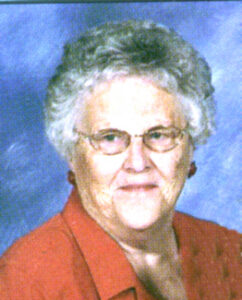 A lifetime Plymouth resident, Elizabeth L. “Betty” Beatty, 81, of 12471 Meadow Drive, Plymouth, passed away at 3:05 p.m. on Tuesday, November 27, 2012 in the St. Joseph Regional Medical Center – Mishawaka following a sudden illness.
Betty was born in Mishawaka, Indiana, on June 23, 1931. She was the daughter of Clair L. and Ruby H. (Thomas) Gurthet. She graduated from Plymouth High School with the Class of 1949 and from Manchester College in 1953. She earned her Masters Degree in Education from Indiana University in 1957.
On August 31, 1957, Betty and Robert D. Beatty were married in Plymouth at the home of her parents.
Betty was a dedicated and beloved teacher. She taught for 7 years in Plymouth. She then taught primarily Kindergarten through second grade in Bremen Schools for 30 years, retiring in 1992.
Active in church, she was a member of the Trinity United Methodist Church for over 60 years and the Sunday School Builders Class.
Her favorite pastime was connecting with her grandchildren. She enjoyed collectables and had a large collection of Bears. She and Bob have been loyal supporters of Plymouth High School sports and season ticket holders for over 40 years.
Betty’s survivors include Bob, her devoted husband of 55 years, a daughter, two sons and their families.
They are; Brian C. Beatty, a son in Houston, TX.; daughter, Becky S. (Joe) Brodner, St. Charles, IL, and grandson John R. and granddaughter Emily E.; son, Brad E. (Erin) Beatty of Etna Green, IN. with three granddaughters, Erica D., Brooklyn R. and Elizabeth.
She is also survived by two brothers: Roger A. (Mildred) Gurthet, Granger, IN., and H. Louis (Joan) Gurthet, Cedar, MI and several nieces and nephews.
Visitation will be Friday, November 30th from 4 – 8 p.m. in the Johnson-Danielson Funeral Home, 1100 N. Michigan St., Plymouth.
Funeral services for Betty will be held Saturday, December 1st at 11 a.m. in the Trinity United Methodist Church, 425 S. Michigan St., Plymouth, with calling one hour prior to services in the church. The Rev. Mark Need, pastor will officiate.
Interment will follow in the New Oakhill Cemetery, Plymouth.
Memorial contributions may be made in her name to the Trinity United Methodist Church, 425 S. Michigan St., Plymouth, IN 46563 or to the Center for Hospice Care, 112 S. Center St., Plymouth, IN 46563.