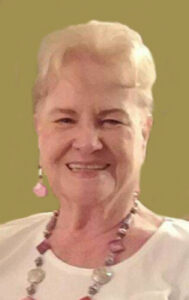 The following plans have been announced to honor and celebrate the life of Elizabeth M. Palbykin. The family will receive friends on Thursday, May 25th from 5 â€“ 7 p.m. EDT in the Johnson-Danielson Funeral Home, 1100 N. Michigan St., Plymouth. On Friday, May 26th in St. Michael Catholic Church, 625 N. Center St., Plymouth beginning at 10:30 a.m. EDT a Words of Remembrance Service will begin, followed by a Mass of Christian Burial at 11 a.m. with Celebrant Fr. John S. Korcsmar.
Immediately following the funeral all are invited to a reception at Christoâ€™s Banquet Center, 830 Lincoln Hwy East in Plymouth for a luncheon and time of continued sharing.
A family committal service in the New Oak Hill Cemetery will be held at a later time.
Preferred are memorial gifts to St. Michael Church & School, 612 N. Walnut St., Plymouth, IN 46563, Ancilla College, P.O. Box 1, Donaldson, IN 46513, or the Marshall County Humane Society, P.O. Box 22, Plymouth, IN 46563.
___________________________________________________________________________
Elizabeth Mae â€œBettyâ€ Palbykin, 87, passed away peacefully with family at her side on Tuesday evening May 2nd in the comfort of her mountainside home in Las Vegas, Nevada.
She was born the daughter of James S. and Lillian E. (Kertson) Perry on July 30, 1929 in Oak Park, Illinois. She was raised on Chicagoâ€™s northwest side and graduated from Steinmetz Academic Centre High School with honors in the Class of 1947.
On May 29, 1948, in the rectory of St. Michael Catholic Church in Plymouth, she became the bride of her high school sweetheart Donald J. Palbykin, whom she met on a blind date. On the 29th of May, 2017 they would have celebrated their 69th wedding anniversary.
The couple received the blessings of seven children in a home they established on North Michigan Street in Plymouth. Early years were made less challenging due to the many homemaking talents Betty garnered from her parents, having been raised in the years following the Great Depression. As a household built on a strong Catholic Faith, the family worshiped at St. Michaelâ€™s and the children were educated there as well. Yet, to a greater extent, their education began at home with Betty, who herself was a constant teacher and a lifelong learner. She even taught the last class of altar servers to say Mass in Latin just prior to Vatican II.
Betty was gifted in many languages and relished an afternoon spent reading and adsorbing a dictionary. She was a talented artist in all media types, and along with her close family friend, Kay Flynn, she was involved in art courses at Ancilla College. It was not long before her creative talents turned into a flair for gardening and decorating. As her artistic and linguistic prowess increased, she continued to support the College and Moon Tree Studios as both a student and substitute teacher. She shared her classical voice and her love of all kinds of music–especially Liturgical–and was a member of St. Michaelâ€™s choir in Plymouth for over 47 years. She was also a choir member at St. Elizabeth Ann Seton in Las Vegas.
Her love of history guided her to a membership in the Daughters of the American Revolution (DAR). She twice served as Regent in 1976 and 1989.
Betty had a beauty and grace which rose from within and blossomed into a smile that warmly greeted everyone she came to know and meet. One of her many repeated mantras were â€œif it is worth doing, it is worth doing right.â€ She had a keen eye for quality, style, and sophistication. Bettyâ€™s friendly nature and non-judgmental character resulted in her ability to have friends from all walks of life. These are memories will forever remain in the hearts and minds of her loving family and friends. They are: her beloved Don, and children: Stephen J. (Kristine Ferguson) Palbykin of Tempe, AZ, Alan M. (Donna Hillman) Palbykin of Plymouth, IN, Martin S. (Mary Theobald) Palbykin of Vail, AZ, Dr. Julie K. (James) Hicks Jr. of Thomson, GA, Debra J. Jones of Spartanburg, SC, Susan E. Palbykin of Las Vegas, NV, and Ann M. (Michael) Dickey of Inman, SC. Also surviving are 14 grandchildren and 12 great-grandchildren.
Betty was preceded in death by her parents and one sister Gloria Nelson.