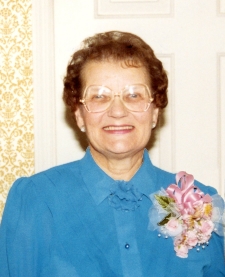 Elizabeth â€œBettyâ€ J. Peterson Brown 98, of Plymouth passed away on Saturday morning April 27, 2019 at Southfield Village in South Bend, Indiana.
She was born on April 8, 1921 in Plymouth to Nolan M. and Elsie Mae Montgomery Delong.
Elizabeth married Carl R. Peterson on April 26, 1941 and he preceded her in death January 4, 1982, she then married William E. Brown on September 4, 1993 and he preceded her in death on June 11, 2009.
â€œBettyâ€ was employed for 20 years in the Marshall County Assessorâ€™s Office having worked under Mr. Weatherhead and J. Levett whom she had much respect for retiring in 1993.
Betty was a member of the Tyner United Methodist Church, Tyner, Indiana and was a member of the United Methodist Womenâ€™s Club. She was also a member of the Marshall County Extension Club.
Survivorâ€™s include son; Dale (Cathy) Peterson of LaPorte, Indiana and daughter; Diane K. Peterson of South Bend, Indiana, grandsonâ€™s; Todd (Julie) Peterson of Remington, Indiana, Patrick (Kimberly) Hoehne of Carmel, Indiana and great grandchildren: Ashley and Blake Peterson, Camryn and Nicole Hoehne.
She was preceded in death by her parents, 1st husband Carl Peterson, 2nd husband William E. Brown, brothers: James DeLong, Ray Delong, and Donald DeLong, sister: Lois Likes and one grandson; Jeremy Hoehne.
Visitation for â€œBettyâ€ will be held on Thursday May 2, 2019 from 6:00 P.M. to 8:00 P.M. at the Johnson-Danielson Funeral Home 1100 N. Michigan Street, Plymouth, Indiana and funeral services will be held on Friday May 3, 2019 also at the funeral home at 10:30 A.M. with Pastor Dennis W. Soule officiating. Private interment will take place at the St. Joseph Valley Memorial Gardens in Granger, Indiana.
Memorials may be directed to the Tyner United Methodist Church, 4501 French Street Tyner, Indiana 46572 or the Southfield Village Foundation 6450 Miami Circle, South Bend, Indiana 46614.