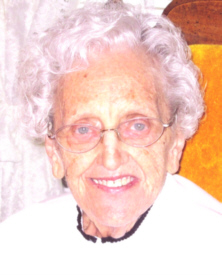 A family matriarch who always showed loving concern and gave freely of herself for the benefit of others has received her Heavenly reward. With her family at her side, Ella Elizabeth Stephens age 86, died peacefully at her residence on the evening of Thursday, March 19, 2009 following a short illness. Her pleasant smile and presence will forever be missed. Ella lived in Plymouth since 1986 coming from East Chicago, Indiana, first residing in the McQueen’s Addition and Miller’s Assisted Living since November of 2007.
Born in East Chicago on December 28, 1922, she was the daughter of Joseph and Elizabeth (Feuks) Pandak. She graduated from Washington High School in East Chicago with the class of 1940.
On August 10, 1947 she became the wife of Harry J. Stephens in Chicago, Illinois. He preceded her in death on June 1, 2000.
Ella first took a job with Youngstown Sheet & Tube Company in East Chicago as a secretary for seven years. She then worked for Railway Express for three years until moving to Chicago and starting a family.
She enjoyed being a homemaker and later the times spent traveling with her soul mate; Harry.
She was a former member of the Faith United Church of Christ in Hammond, Indiana where she was the first woman elder in the church, she also sang in the choir, was a member of the Ladies Aide Society, treasurer for 14 years and president of the Women’s Guild for one year. After their move to Plymouth, Ella became an immediate and active member of the First United Church of Christ. She is survived by two daughters Donna E. Zatkoff of Ogden Dunes, IN; Linda C. & Jim Keister of Plymouth, IN; and six grandchildren Michael Toth of Honolulu, HI; Kevin Toth of St. Petersburg, FL; Marla (Toth) & Halit Berber of Schererville, IN; Eric Rubesha of Plymouth, IN; Laurie Rubesha of Fishers, IN; and Brandon Keister of Plymouth, IN; two nieces survive as well.
Ella was preceded in death by her spouse, five brothers; Albert, Elmer, Walter, Franklin, and Ernest, and an infant sister Ella.
The family will welcome friends to share memories on Monday, March 23, 2009 from 3 to 8 p.m.(EDT), and after noon on Tuesday, March 24, 2009 at the Johnson-Danielson Funeral Home, 1100 N. Michigan Street, Plymouth.
Funeral services for Ella will be held on Tuesday March 24, 2009 at 1 p.m. (EDT) in the Johnson-Danielson Funeral Home. The Rev. Ronald Liechty, retired pastor of the First United Church of Christ will officiate.
Burial will follow in Graceland Cemetery, Valparaiso.
Memorial contributions may be given to the First United Church of Christ, 321 N. Center St. Plymouth, IN 46563 or to The Center for Hospice and Palliative Care, 112 S. Center St. Plymouth.