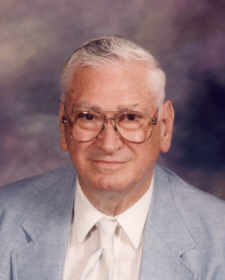 Ellis E. Licht, 87, died on Wednesday morning, August 27, 2008, in the Pilgrim Manor Nursing Center, Plymouth, Ind.
Ellis was known and loved for years as the “Pie Man” of Plymouth and Culver.
A more important nickname is the one his 11 children called him.
“Dad.”
Born in Shoals, Ind., on May 4, 1921, Ellis was the son of Henry and Mary L. McDonald Licht.
In 1942, he joined the U.S. Navy and learned to cook during World War II.
Mostly he liked to bake.
Discharged in 1946, he earned his private pilot’s license through the GI Bill and was working on his commercial license when a near-death experience changed his life.
Two years later, Ellis took a job at the Culver Military Academy as an assistant baker, where he worked for 38 years, retiring in 1986. Not able to stay out of the kitchen, Ellis created a twice-weekly route for his pie business, delivering about 60 pies a week in Plymouth and Culver.
Ellis and Ferrial Duddleston, the postmaster at the Academy and the local “cabby,” fell in love and married in Santa Claus, Ind., on Christmas Eve of 1948.
He became the father of 11 children, birth father to none of them. All of the children were born to two of his three sisters, who became unable to care for them. He and Ferrial raised the eight girls and three boys as their own.
He taught his children how to work hard, how to share and how to be part of a family.
When Ferrial died in 1969, Ellis was left with four children at home. He always said that God had him by the hand.
“There were things in my future that He (God) wanted me to do and those 11 children were part of the plan.”
Ellis is survived by six daughters: Vickie (Elmer) Wagner of Culver; Jan (Dan) Savage of Argos; Ann Moesely of Washington, Ind.; Rita (Larry) Binkley of Punta Gorda, Fla.; Elaine (Jim) Schuh of Elkhart and Becky (Richard) Trusty of Plymouth and three sons: Don (Alice) Lutz of Culver; Richard (Judy ) Lutz of Knox and Robert Licht of Culver. 23 Grandchildren and 35 Great Grandchildren survive as well.
He was preceded in death by his parents, his beloved wife, Ferrial, three sisters: Grace, Inez and Virginia and by two daughters, Anna L. Hartle and Patty Weaver Davis.
Family and friends may visit and share memories of Ellis at the Johnson-Danielson Funeral Home, 1100 N. Michigan St., Plymouth, on Friday, August 29, 2008, from 4 to 8 p.m. and two hours before the service at 11 a.m. on Saturday, August 30, 2008, at the Wesley United Methodist Church, 511 School St., Culver, Ind., where Ellis attended.
Pastor Larry Saunders will officiate at Ellis’ funeral services.
Interment will be in the Culver Masonic Cemetery, Culver, Ind., where Military Rites will be provided by the Culver V.F.W.
Memorial gifts may be made to the Wesley United Methodist Church or the Ronald McDonald House.