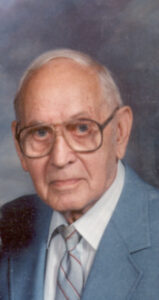 Elmer Henry Peters, 87, a lifetime Marshall County resident, living in Pendleton Ind., for the past two years, died at the Rawlins House Care Facility following a short illness, at 4:30 a.m. on Wednesday, August 20, 2003.
Elmer was born on March 28, 1916, in Michigan City, Ind. He was the son of Louie August and Anna Mary Barfknecht Peters. He graduated from West High School with the class of 1934 and attended Purdue University on a 4-H scholarship.
On September 2, 1939, in Bremen, Elmer took as his bride, Evelyn L. Marks, who he had met through a Junior 4-H Leaders program. They would have celebrated their 64th wedding anniversary in less than two weeks.
Elmer was the hatchery manager with the Farm Bureau Co-Op of Marshall County, retiring in 1972. He then continued to offer his services as a field representative for several Northern Indiana Co-Ops, for a total of 33 years. He then became involved with Thompson Realty in sales. Later, from 1979 to 1983, he and his wife Evelyn were the site managers for Garden Court East Apartments.
Elmer loved to fish and enjoyed woodworking and gardening. In his younger years, he and Evelyn were bicyclists and enjoyed working at many crafts. He and his wife visited all 50 states and traveled in Europe.
A member for over 50 years of the First United Methodist Church, Plymouth, Elmer was involved in the Sunday School program and served as a church trustee and a board member. A charter member of the Lions Club, he was a member of the Farm Bureau and volunteer at the Historical Museum and for Meals on Wheels. A member of the Marshall County Genealogical Society, he had traced five lines of family members. Elmer is survived by his wife, Evelyn, and by their son, two daughters and their families.
His daughters are Jane A. and John H. Silvey, Middletown, Ind. and Cheryl A. and Barton N. Ball, Rochester, Ind. Gary D. Peters, their son, lives in Grand Rapids, Mich.
Five grandchildren also survive. They are: Scott Silvey, Anderson; Brent and Nicole Silvey, Noblesville; Jarrod Ball, Muncie; Brad Ball, Blacksburg, Va.; and Elyssa Peters of Grand Rapids.
A sister, Grace M. Woodfill, Plymouth, also survives, together with several nieces and nephews.
Elmer is preceded in death by his parents, an infant son, Terry L. Peters, and by a brother, Wilmer Peters and a sister, Viola Price.
A celebration of Elmer’s life will be held from 3 to 6 p.m. on Sunday, August 24, 2003, in the Johnson-Danielson Funeral Home, 1100 N. Michigan St., Plymouth.
Funeral services, officiated by the Rev. Dr. Dean Fager, pastor of the First United Methodist Church, will be held in the funeral home on Monday, August 25, 2003, at 10 a.m.
Burial will be in Oakhill Cemetery.
Memorial gifts in Elmer’s memory may be made to the First United Methodist Church or to the Marshall County Historical Museum.