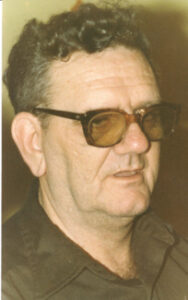 Elmer L. Clark, 84, a longtime resident of Marshall County and former resident of Plymouth’s Berkley Square, passed away following an illness at 4:51 p.m. Monday, September 24, 2012 in the Pilgrim Manor Nursing Home, Plymouth.
Elmer was born in LaPaz, Indiana on September 27, 1927, the son of Orval F. and Florence M. (Parker) Clark. He attended LaPaz Schools and in November of 1945, her joined the United States Army and served during WWII until his honorable discharge in May of 1947.
On December 1, 1947 in Indianapolis, Indiana he took as his bride the former Bessie L. Wilson. She would precede him in death on March 24, 2005.
Elmer worked for the Allis Chalmers Co. in Matteson, Illinois as an inspector for 20 years and retired in 1986 and returned to the Plymouth area.
He enjoyed golf and watching the Wheel of Fortune game show.
Elmer held membership in the Bremen V.F.W. Post 8972 and the LaPaz American Legion Post 385.
He is survived by eight children; Kenneth R. (Joan) Clark of Argos, Michael L. Clark of Walkerton, Jack E. Clark of LaPaz, Charles H. Clark of Panama City Beach, Florida, Elizabeth Ann Johnson of Cincinnati, Ohio, Kirk D. (Patricia) Clark of Plymouth, James L. Clark of Portland, Tenn., and Shiela T. (Joe) Dixon of Kentucky. Numerous grandchildren, great-grandchildren and step-grandchildren survive as well.
Elmer is also survived by a brother, Randall (Peggy) Clark of Walkerton, Indiana and a sister, Joyce M. Clark of Winchester, Tenn., along with many nieces and nephews.
He was preceded in death by his wife, a sister, Laura Kirk and a brother, Fred Clark.
Visitation will be held in the Johnson-Danielson Funeral Home, 1100 N. Michigan St., Plymouth on Friday, September 28, 2012 from noon until 2 p.m. Funeral services will follow in the funeral home at 2 p.m. with the Rev. Pat Puglisi, pastor of the Plymouth Missionary Church officiating.
Burial will immediately follow in the County Line Church of the Brethren Cemetery at U.S. 31 North and Tyler Road, north of LaPaz, with Military Honors provided by members of the LaPaz American Legion Post 385.
Memorial gifts can be made to the Marshall County Cancer Society, c/o 9739 Sunnyside Drive, Plymouth, IN 46563.