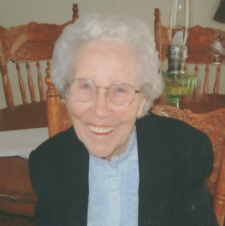 Elnora O. Gibson, 89, formerly living on W. Monroe St., Plymouth, died in Miller’s Merry Manor, Plymouth, at 7:50 p.m. on Sunday, Oct. 7, 2007. She had been a Plymouth resident since 1933.
Born in Elkhart, Ind., on July 6, 1918, she was the daughter of Daniel and Minnie Biller Wogomon.
She attended school in Syracuse.
On July 30, 1934, in Plymouth, she and Milton I. Gibson were married. Milton died on Dec. 30, 1982.
A housewife, Elnora also had worked in Ames Department Store and Hiester’s Grocery Store for 15 years.
She enjoyed bowling and bowled with South Bend friends two days a week for a number of years.
Elnora was a member of the Christ Church of Plymouth.
Two sons survive Elnora’s death. They are: Larry ( Linda) Gibson, Dennis ( Sue) Gibson all of Plymouth.
Nine grandchildren and eleven great-grandchildren and three step-great-grandchildren also survive.
Elnora was preceded in death by her husband, a son, William “Butch” Gibson, and two great-grandchildren: Michael Richardson and Amanda Bunch.
Friends are invited to share memories and celebrate the life of Elnora Gibson from 4 to 8 p.m. on Friday, Oct. 12, 2007, in the Johnson-Danielson Funeral Home, 1100 N. Michigan St., Plymouth.
Funeral service for Elnora, officiated by the Rev. Larry Ferguson, will be held at 11:00 a.m. on Saturday, October 13, 2007, in the funeral home.
Burial will be in New Oakhill Cemetery, Plymouth.
Memorial gifts in Elnora’s memory may be made to the Alzheimers Association.