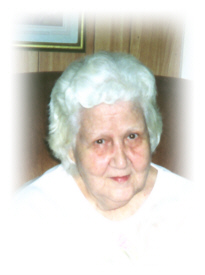 Eloise J. Balmer, 77, a resident of Bourbon since 1992, died on October 16, 2007 in South Bend, following an extended illness. Eloise has always known the existence of God and has had guidance from Him several times throughout the years. She was born in Lakeville, Ind. on June 20, 1930 the daughter of James R. and Laura M. Terwilligar Beam. She graduated from Plymouth High School with the class of 1948. Her life involved traveling and living in different areas of the United States. She resided in Indiana, Florida and Minnesota and had visited Texas and California.
Eloise had enlisted into the Army in 1948 as a nurse in training during the Korean Conflict. After being discharged from the service, she married LaVon R. Balmer on March 23, 1952 in Plymouth. LaVon preceded her in death on Dec. 3, 2001.
Eloise was never without a friend. She could talk to anyone at anytime. She kept active in the communities in which she lived while raising four children. She had served on the Bremen School’s PTA, the Bremen Hospital Auxiliary, worked the election polls in Cass Lake, MN and named several roads in the Cass County, Ten Lakes Township. She was also a member of the Disabled American Veteran’s Association and the local sheriff’s association. Eloise had attended Riverside Methodist Church near Bremen and Foster’s Chapel near Bourbon. She had worked at Teal’s Grocery store in Cass Lake, the Bendix factory in South Bend, and Meyer’s Nursing Home in Bremen. Eloise’s “green thumb” was busy during the years she operated a small greenhouse on the farm filled with geraniums and tomatoes.
She is survived by her two sons, Larry W. Balmer and his wife Marsha, of Plymouth; Walter R. “Dick” Balmer and his wife Jill, of Bremen; two daughters, Yvonne E. Balmer and husband James R. Shirley of Bloomington and Darla K. Finnegan and husband Pat of Bemidji, MN. Grandchildren include Melissa (Todd) Ferguson of Argos, IN; Adam (Deidre) Balmer of Warner Robins GA; Valerie (Chris) Unruh of LaPaz, IN; Scotty Finnegan of Bemidji, MN; Amanda Hershberger of Kailua, HI; and Brooke Hershberger of Bremen, IN. Her remaining siblings are Rhea Johnston of Phoenix, AZ and Anita Wamsley of Medina, OH. She has several nieces and nephews, great-nieces and nephews, and six great-grandchildren.
Friends are invited to celebrate Eloise’s life and share memories of her from 5 to 7 PM on Friday, October 19, 2007, at the Johnson-Danielson Funeral Home, 1100 N. Michigan St., Plymouth, Indiana. Services will follow visitation at 7 PM in the funeral home with her nephew Rev. John Hand presiding. Military honors will be accorded Eloise by members of the D.A.V. Chapter 42 assisted by members of Plymouth V.F.W. Post 1162 immediately following services at the funeral home.
Burial will be in the Oak Hill Cemetery, Plymouth. In lieu of flowers memorial gifts may be given in Eloise’s name to the Disabled American Veteran’s Association, 606 Lake Avenue, Plymouth, IN 46563.