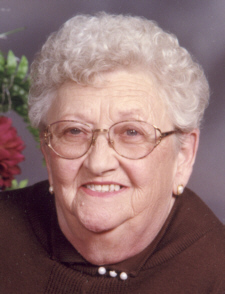 Eloise Runkle, 83, a Plymouth resident since 1988, coming from Rochester, passed away at 1:00 a.m. on Friday, February 10, 2012 at Miller’s Merry Manor, Culver.
The daughter of Rev. Roy R. and Blanche R. Cochran Alexander, Eloise was born on January 26, 1929 in Hartford City, Indiana. She was a 1947 graduate of Roll, IN High School.
On February 21, 1965 in South Bend, Eloise married Charles Runkle. Charles died on January 2, 1985.
Eloise had owned the Airport Café in Hartford City for five years, had worked at Hart-Shafner & Marks in Rochester for 10 years, owned Lakeview Camp Grounds from 1973 to 1988, worked at Party-Pak in Plymouth and in recent years, she had been a caretaker for the elderly.
She was a member of the Plymouth Baptist Church. Eloise also liked to fish, do quilting, collected clowns, worked crossword puzzles and especially enjoyed spending time with her children, grandchildren and great grandchildren.
Eloise is survived by three daughters: Sandra K. & Don Schultz; Sherry L. & Larry Townsend, Connie E. Gaby; one son, Rick A. & Lee Ann Bubp all of Plymouth; grand children: Rev. Brett Crump, Brian Crump, Kristopher Fear, Kerry Fear, Jason Hill, Sarah Hendrix, Jessica Bubp, Courtney Gaby; great grandchildren: Jordan Crump, Emily Crump, Alivia Crump, Milo Crump, Austin Fear, Garret Fear, Jaden Fear, Tobias Hendrix, Leilana Hendrix, Anela Hill, Cory Hill, and one great grandchild due in July; a sister: Helen L. & Ronald James of Upland, IN. and a sister-in-law: Ilene Alexander of Hartford City, IN.
She was preceded by her parents; her husband, Chuck; two brothers: Leo Alexander and Leon Alexander; a sister: Evelyn D. Eaton; a son-in-law: Charles Gaby, two grandsons: Cory Gaby and Chase Gaby, and a great granddaughter, Angel Hendrix.
The family will receive friends on Tuesday, February 14, 2012 from 4 to 8 p.m. in the Johnson-Danielson Funeral Home, 1100 N. Michigan Street, Plymouth, and on Wednesday, February 15, 2012 for one hour prior to the 10:00 a.m. funeral services, officiated by Pastor Doug Jividen at the Plymouth Baptist Church, 11345 9A Road, Plymouth.
Burial will be in the Rochester I.O.O.F. Cemetery.
Memorial gifts may be given to a charity of the donor’s choice.