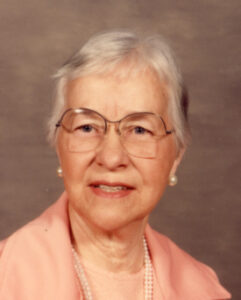 Elsie Mary Maenhout, 84, died of natural causes on Wednesday evening, September 28, 2011, at her home on 1st Road, in Bremen, IN.
Elsie was born in Mishawaka, IN. on December 26, 1926. She was the daughter of Constant and Selma Van Den Berghe Vervynckt.
On August 23, 1947, Elsie and Remie Cyriel Maenhout were married. They met and began their 55 year marriage at Sacred Heart Catholic Church, South Bend. Remie died on February 12, 2002.
Elsie was always working, she tended to the cows, feeding and watering them daily, along with numerous other chores that needed to be completed around the farm.
She also took care of the large vegetable and flower garden and making sure there was food on the table every day for the family. Elsie was an avid reader and was a wonderful seamstress, but most of all she was completely dedicated to her husband, her son, and the grandchildren. Her biggest joy was being surrounded by her family.
She is survived by her son, Russell Maenhout, Bremen, and 3 grandchildren, Ryan (Jessica) Maenhout, Angie (Emanuel) Reese and Kevin (Amy) Maenhout.
Also surviving Elsie are her 6 great grandchildren; Allyson, Ryan Nicholas, Karrissa, Jaisyn, Trisha and Lucas.
She was preceded in death by her parents, her husband, a daughter, Marsha, a young sister, Clara, two brothers, August and Achiel and her daughter- in- law, Patty Maenhout.
Visiting will be from noon to 2 p.m. Saturday, October 1, 2011, in the Johnson-Danielson Funeral Home, 1100 N. Michigan St., Plymouth. Funeral services for Elsie will follow the visitation at 2 p.m. in the funeral home. The Rev. Steven Resner, pastor of Calvary Lutheran Church, Plymouth, Indiana, will officiate.
Interment will be in the New Oakhill Cemetery, Plymouth.
Memorial contributions may be made to The Center for Hospice Care, 112 S. Center St., Plymouth.