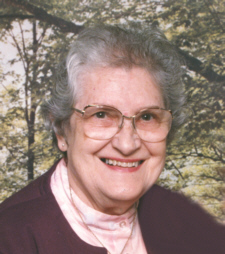 Emma Lou Bollenbacher, 84, 408 E. Washington St., Plymouth, died in Miller’s Merry Manor, Plymouth, on Saturday, March 20, 2010 at 12:50 p.m.
Emma Lou was born in Plymouth the daughter of Jesse and Esther L. Wright Menser on January 6, 1926. She was a lifelong resident of Marshall County.
She attended High School in Plymouth and on Sept. 4, 1948 was married to Paul K. Bollenbacher in the First United Church of Christ. Paul died on August 6, 1952.
A factory assembly worker at Hehr International for 21 ½ years, she retired in 2003.
In her spare time, she enjoyed crocheting.
She was a longtime member of the First United Church of Christ.
Emma Lou is survived by a son and daughter-in-law, Paul K. and Diane M. Bollenbacher. A grandson, Edward Andrew “Andy” Bollenbacher also survives together with two sisters and a brother. They are: Marjorie L. Kowalski, Barbara A. Pentelow and Howard Menser, all of Plymouth.
Emma Lou was preceded in death by her parents, her husband and two brothers, Harry L. and C. Burdell “Bud” Menser.
Friends are invited to celebrate the life of Emma Lou on Wednesday, March 24, 2010, from 4 to 7 p.m. at the Johnson-Danielson Funeral Home, 1100 N. Michigan St., Plymouth.
Funeral services for Emma Lou will be held at 11 a.m. on Thursday, March 25, 2010, with calling one hour prior to services at the First United Church of Christ 321 North Center Street Plymouth, Indiana. The Rev. Robin Keating will officiate.
Interment will be in the Oakhill Cemetery, Plymouth.
Memorial gifts may be made to the First United Church of Christ, 321 North Center Street Plymouth, Indiana.