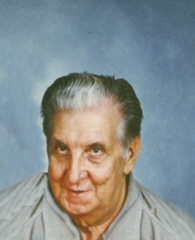 Emmanuel C. “Slim” Kepler, 83, a Marshall County resident most of his life, living at 801 Bayless St., Plymouth, for the past 20 years, died of apparent heart failure at 4:45 p.m. on Thursday, August 18, 2005, in the St. Joseph Regional Medical Center, Plymouth.
Slim was the son of Harry and Augusta Foltz Kepler. He was born in Argos, Ind., on September 29, 1921 and graduated from Argos High School with the class of 1939.
As his name implies, he was tall and thin and a terrific basketball player. He played in a semi-pro league for General Electric, competing against such teams as the Harlem Globe Trotters. Injuries forced him to retire and from going further in the game.
On August 3, 1946, in Mentone, Ind., Slim and Hazel N. Pelky were married. Hazel died on March 5, 1990.
As a skilled production worker, he worked first at the Fort Wayne General Electric plant going then to Kingsburg Ordinance and thence to McCord Corp. and Studebakers. He retired from Uniroyal in 1971.
Due to his stature, he was known throughout the Plymouth Fire Department as “Hook ‘n Ladder.” He was a volunteer firefighter for 21 years, from 1950 to 1971. He continued to serve as a delegate to the Indiana Fire Conventions and had worked ‘stake-outs’ with the Marshall County Sheriffs’ Departments through three administrations.
Slim loved to cook and bake. One of his and others, favorites was his Super-sized Angel Food Cakes, a treat at all family reunions. He enjoyed fishing local lakes and following Professional Wrestling.
He was a lifetime member of the Ft. Wayne Eagles Lodge.
A daughter, Carol A. Thomas of Warsaw and a son, Elwood “Woodie” L. R. Kepler, Plymouth, survive Slim’s death.
Five grandchildren: Barbara Thomas, Jennifer “J.J.” Thomas, Alan Kepler, Jackie Kepler and Samantha Lynd also survive together with 16 great-grandchildren and a sister, I. Pearl Rice, of Lake Station, Ind.
A daughter-in-law, Eldonna Kepler, Bourbon, survives as well.
Slim was preceded in death by his parents, his beloved wife, brothers; Henry Kepler, Francis “Ed” Kepler, Frank Kepler and sisters, Stella Beatty, Mary Zartman, Mable Samuels and Emma Zolman.
Friends will be welcomed to celebrate Slim’s life from 3 to 7 p.m. Sunday, August 21, 2005, at the Johnson-Danielson Funeral Home, 1100 N. Michigan St., Plymouth. Additional visitation will be available after 7 a.m. on Monday, August 22nd. Funeral services for Slim will be held at 11 a.m. on Monday, August 22, 2005, in the funeral home. The Rev. Chuck Krieg, pastor of the Salem United Methodist Church, Bremen, will officiate.
Burial will be in the Grovertown Cemetery, Grovertown, Ind.
Memorial gifts in Slim’s memory may be made to the Plymouth Volunteer Fire Department.