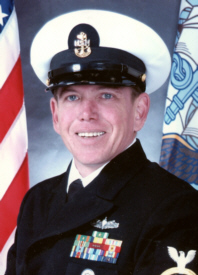 Eric Laurence Arvesen, 47, of Plymouth, died unexpectedly of natural causes on Saturday, October 11, 2014 at the St. Joseph Regional Medical Center – Plymouth Campus.
He was born on April 8, 1967 in Harvey, Illinois, to Robert C. and Janet L. (Van Asten) Arvesen. One year later the family moved to Plymouth where he would receive his education. During high school he was active with theater and choir, graduating from Plymouth High School in 1985.
At an early age it was well recognized by family and friends that Eric possessed an innate virtue of caring for others willingly and selflessly, as he accepted the duty of lovingly caring for his ailing parents and his sister Barbara.
He carried that same dedication to serve others when he chose a career in the United States Navy, in which he honorably served for over 24 years, retiring as Chief Petty Officer. During the Persian Gulf War he was a boatswain mate and had major assignments on the USS Wainwright, USS Elliot and USS Jarrett. He was stationed in San Diego for many years and later became an emergency medical technician (EMT) with the city’s Disaster Relief and Recovery Team.
After retiring from the Navy in 2009, Eric returned to Plymouth and resided with his father at Lawrence Lake, where he served as President of the lake’s property owners association. Eric worked for Majestic Security and he currently served as a safety monitor at Plymouth High School and drove a bus for hearing-impaired students. Eric lived on the edge of excitement and took every opportunity to enjoy skydiving, snow skiing, scuba diving, boating and NASCAR. He was an accomplished woodworker, a music and movie trivia buff, an avid KISS fan and concert attendee and an inquisitive internet learner. He was a life member of the Veterans of Foreign Wars – Marshall County Post 1162.
Eric is survived by sisters Nancy P. Bice of Marshall, MI, Karen M. Green of Plymouth and Patty L. Pynaert of Mishawaka, brothers Robert (Rhonda) Arvesen Jr. of Plymouth and Jerry (Janice) Arvesen of Bloomington, IN, sister-in-law Paula Arvesen of Bremen and many nieces and nephews. Preceded in death were Eric’s parents, sister Barbara E. Arvesen and brother Mark E. Arvesen.
Eric maintained a home with his soul mate Angelique M. “Angie” Palmitessa-Weidner, quickly embraced her five children into his life, and became a father figure to Adriana, Angie’s granddaughter. Forever present was his canine friend Shadow.
Family and friends will gather to celebrate Eric’s life on Thursday, October 16th from 4 – 8 p.m. in the Johnson-Danielson Funeral Home, 1100 N. Michigan St., Plymouth. Services will be held in the funeral home at 10 a.m. on Friday, October 17th with Rev. Herb Hiatt, pastor of Plymouth’s Church of the Heartland officiating. Military honors will immediately be accorded by members of the Plymouth American Legion Post 27, Veterans of Foreign Wars – Marshall County Post 1162 and the D.A.V.
Burial with Navy Honors will be held at 2 p.m. Friday in the Marion National Cemetery, Marion, Indiana. Preferred are memorial gifts to the Marshall County Humane Society, P.O. Box 22, Plymouth, IN 46563 or the Disabled American Veterans – Marshall County Chapter #42 c/o 4632 Queen Road, Plymouth, IN 46563.