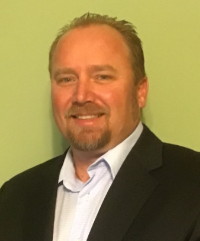 Erik Gilbert, 47, lost his courageous battle to cancer suddenly on Friday, September 20, 2019. He had his wife by his side and was surrounded in love by his family. Erik was a son, a husband, a dad, a brother, an uncle, a good friend and most of all, a genuine, caring soul.
Born in Marion, Indiana on November 26, 1971, Erik was the son of Sandra M. Powell Gilbert and Eldred Gilbert. He graduated from Bremen High School with the class of 1990. Erik was a star athlete in football and wrestling. He was a Charter Member of Lambda Chi Alpha in Las Vegas, NV. Erik would go on to attend Purdue University and attain his Bachelor of Science Degree in 1995.
It was fate and the city of Ft. Wayne, Indiana, that brought Erik and the love of his life, Christina M. Mease together. They would be married in Bremen, Indiana on August 5, 2000 and raise their son, Christopher, in Plymouth. The love, kindness and friendship these two had for each other was the picture of true love.
He found passion in the restaurant business for many years, working his way up to a Regional Manager. He was a Level 1 Sommelier with the Court of Masters Sommeliers. He most recently worked for MT Gilbert in Plymouth.
Erik was a family man; proud, caring and always interested in knowing what was going on with each individual person. You were always his focus and had his full attention when he was talking to you. If you ever needed help or guidance with anything, he either knew the answer or would work with you until it was right. Erik was a jack of all trades and enjoyed learning new things.
He was an avid Star Wars Fan. Each year, Christina and he would put up the regular Christmas tree and his Star Wars tree, the eve of Thanksgiving; a tradition she will hold dear in her heart. He enjoyed fly fishing, taking yearly trips with his family and friends. Erik was an avid football fan, always enjoying a good tailgate out on campus or in the driveway. He also loved cooking and was a Tabasco decor collector.
Erik is survived by his wife of 19 wonderful years, Christina of Plymouth and son, Christopher Isom of Paducah, KY; his parents, Sandra Powell Gilbert of Converse, IN and Eldred Gilbert of LaPaz, IN; and his siblings: Bart (Sherry) Gilbert of Westfield, IN, Wendee (Troy Reed) Gilbert of Fishers, IN, Mark Gilbert of Las Vegas, NV, Terry (Sheila) Gilbert of San Marcos, CA; Christine (Dan) Tharaldson of Colorado Springs, CO, Mick (Tabatha) Gilbert of Walkerton, and Jan (Sean) O’Connell of Escondido, CA, as well as, many nieces, nephews, family members and dear friends.
He was preceded in death by his grandparents: Floyd and Audrey Powell of Converse, IN and Eldred and Norma Gilbert of Thompsonville, MI.
A Celebration of Erikâ€™s Life will be held at a later date. In lieu of flowers, memorial contributions can be made to the family to help with medical expenses.