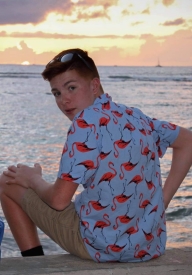 Erik Lucas NuÃ±ez, 15, son of Simone D. (Loew) & Refugio E. NuÃ±ez-PeÃ±a, passed away Wednesday, June 5, 2019, in Toledo, Ohio from injuries incurred in a Memorial Day automobile accident that claimed the lives of his parents.
He was born in Plymouth, Indiana on August 13, 2003. A member of St. Michael Roman Catholic Church, Erik had attended St. Michael School through the 6th grade. He played junior league soccer, enjoyed skateboarding. He was currently a freshman at Plymouth High School and an avid member of the PHS marching band drumline where his commitment and humor was highly recognized.
Erik NuÃ±ez was an amazing young man known for his energy and aspirations. He would one day be a United States Air Force pilot. Family was everything and they enjoyed life together. They have traveled across the globe and have shared many camping trips as a family. On Memorial Day, they were returning from one of many camping trips, this one to the Canadian Niagara Falls.
Survivors include his two sisters; Isabel M. NuÃ±ez, and Selia E. NuÃ±ez, his maternal grandparents Joachim O. and Roswitha B. (Ruettger) Loew all of Plymouth. Paternal grandparents Teofilo NuÃ±ez of Texas and Emiliana PeÃ±a of Elkhart. Many loving aunts, uncles, cousins and friends. Other family members survive throughout Germany and Texas.
A combined visitation will be on Friday, June 7th from 3 â€“ 8 p.m. in the PLYMOUTH WESLEYAN CHURCH, 11203 S. Michigan St., Plymouth. A Mass of Christian Burial will be held at 2 p.m. Saturday, June 8th in ST. MICHAEL CATHOLIC CHURCH, 613 N. Center St., Plymouth with Pastor Fr. John Korcsmar CSC and Fr. Craig Borchard officiating.
Interment will be in the New Oak Hill Cemetery, Plymouth.
In lieu of flowers, memorial gifts in Erikâ€™s name may be made to the PHS Band Program, 1 Big Red Drive, Plymouth, IN 46563.