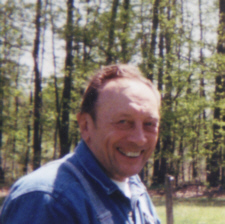 Erling Lance “Barney” Boberg, 68, 14390 South Nutmeg Road, Plymouth, Indiana, lost his long and courageous battle with cancer, at 12:40 a.m. on Sunday, January 29, 2005. Barney died in Saint Joseph Regional Medical Center, South Bend.
Born in Chicago, Illinois, on December 22, 1937, Barney was the son of Ernest Earl Boberg , Leona Johnson Boberg Zuder and William Zuder. Barney’s birth father died when he was young and he was raised by his mother and step-father.
During his youth, he went to school in Bourbon, but spent his summers in Chicago.
He served his country in the United States Army.
Barney, employed at Commonwealth Edison in Whiting, Indiana, worked his way up to shift manager and plant supervisor. He retired from there after over forty years of service.
He loved animals and all things of nature. He worked rehabbing hurt or sick animals and raised exotic sheep. He enjoyed reading and the arts and crafts.
A motorcyclist, he visited the 48 continental United States on his bike, enjoying the adventure and the scenery on the trips.
He grew gourds and was a member of the Indiana and the American Gourd Societies.
Barney is survived by his daughter, Stacey Lynn Boberg, Cedar Lake, Indiana, and two grandsons, Brian and Benjamin Boberg , also of Cedar Lake.
Dixie Lingle, his partner, of Plymouth, survives as well.
Two sisters, Arlene Boberg, Nappanee, Indiana, and Toni Vining, Etna Green, Indiana, and a cousin, Harold Johnson of Akron, Indiana, survive together with two nieces: Melisa Rodriquez, Indianapolis, and Mary Jane Collins of Linwood, Illinois.
He was preceded in death by his parents.
Friends will be welcomed on Wednesday, February 1, 2006, from 4 to 7 p.m. in the Johnson-Danielson Funeral Home, 1100 N. Michigan St., Plymouth.
Funeral services for Barney will be held after visitation at 7 p.m. on Wednesday in the funeral home. The Rev. Dr. Dean Fager, pastor of the First United Methodist Church of Plymouth, will officiate.
Memorial gifts in Barney’s memory may be made to the Marshall County Humane Society or the Marshall County Chapter of the American Cancer Association.