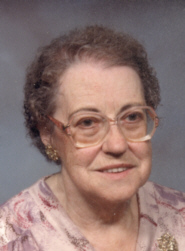 ERMA R. SLONAKER, 91, Formerly of Klinger Drive Plymouth, died Wednesday August 2, 2006 at 11:25 am in the Sterling House, South Bend, Indiana.
Erma was born in Culver, Indiana to Joseph D. and Eva Davis Heiser. She was a graduate of Culver High School with the class of 1932. In February of 1938 in South Bend, Indiana she married Virgil Slonaker, he passed away suddenly seven years later at the age of 32, leaving her to raise two small children.
Erma first worked as a legal stenographer at the State Exchange Bank, and then she worked for Farm Bureau Insurance, West High School Lunchroom, Federal Land Bank, Transit Mix, was an office manger for a C.P.A. office, before becoming a Licensed Public Accountant herself in 1969 until her retirement in 2000. Erma was still performing tax preparations for her family and friends at the age of 88, she only gave it up at the age of 89 because of her poor eye sight.
She was very active and loyal in the Plymouth Church of the Brethren; she served on the church board as the treasurer and as the financial secretary. Erma was a member in the Women’s Democratic Club, Friendly 30 Home Extension Club, former member of the Business and Professional Women’s Club.
In her spare time she enjoyed reading, gardening, working crossword puzzles, crocheting, and knitting. Erma was as wonderful cook that loved to experiment with new recipes. Erma is survived by two children, a son; Dean and Lillian Slonaker, Plymouth, a daughter, Sue Ann and James Adair, South Bend. She is survived by four grandchildren, Allen and Kathy Slonaker, Plymouth, Ronald and Cindy Slonaker, Plymouth, Ruth and Lowell Hatfield, Argos, Brett Adair, South Bend. Also surviving her are six great grandchildren, a brother, Joe and Lucille Heiser, a sister in law, Esther and Stanley Jacknewitz, Maryland and numerous, nieces and nephews, great nieces and nephews and great – great nieces and nephews.
Erma was preceded in death by her parents, husband, and four brothers, William, Russell, David, and Robert.
Visitation for Erma will be held Friday, August 4, 2006 from 4 to 8 pm in the Johnson-Danielson Funeral Home, 1100 North Michigan Street Plymouth. There is also one hour of calling prior to services at the church.
Funeral services for Erma will be held at 2:00 pm on Saturday August 5, 2006 in the Plymouth Church of the Brethren, 1130 North Michigan Street Plymouth, Indiana, with the Rev. David Kerkove, officiating.
Burial will in the Culver Masonic Cemetery, Culver, Indiana.
Memorial contributions may be made to the Plymouth Church of the Brethren, or Center for Hospice and Palliative Care.