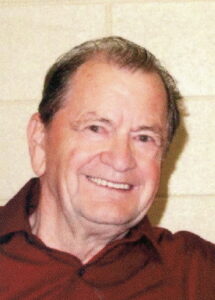 He was born on June 23, 1933 in Tiptop, Kentucky to Stella and Wesley Rowe. Ernest moved to Starke County, IN in 1939 where he lived until he married Virginia Alliss in Pine, IN of February 4, 1957.

Ernest was a veteran of the Korean War and served in the Signal Corps Message Center in the Cryptography Department, writing and deciphering message codes. Ernest was a graduate of Washington University in St. Louis, MO.

Rowe lived in four different states and nine different cities. He and his wife traveled to forty-three countries.

He worked for Liberty Loan Company in Hobart, Gary, and Hammond, IN. He was then transferred to Millinocket, Maine, then to Taunton, Worster and Waltham, Massachusetts.

He moved to St. Louis, MO in 1967, to work for Union Planters Bank as a Vice President. He retired in 1999, having worked for 33 years. Ernest, along with his wife Virginia, owned a Real Estate Company for twenty-five years in the St. Louis area.

After retiring to Plymouth, IN, he started substitute teaching for the Plymouth, Culver and Bremen School systems.

He is survived by his sister-in-law Janet (Robert) Lortie of Kendallville, IN; brother-in-law Roger (Carol) Alliss of Frankfort, ILL; many nieces and nephews, many great-nieces and nephews and good friend Cliff Allen.

Memorial contributions can be made to the American Cancer Society, 111 E Ludwig Rd Suite 105, Fort Wayne, IN 46825.

Condolences may be sent to the family through the website: www.johnson-danielson.com