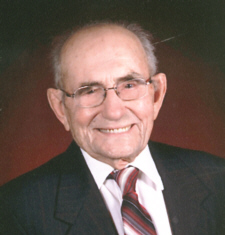 Ernest Eugene Shaffer, 98, of Windmill Drive, Plymouth, died of natural causes in St. Joseph Regional Medical Center, Plymouth Campus, at 12:55 a.m., on Thursday, December 3 2009.
Ernest was born in Walnut Twp., Marshall County, Indiana. on December 2, 1911. He was the son of Joseph Richard and Minnie Belle Casey Shaffer. In 1923, he completed the 9th grade at Argos High School.
A lifetime resident, Ernest was married to Alice Thompson Stull on April 3, 1983 in the Plymouth Wesleyan Church.
In WWII, Ernest served his country in the United States Army, enlisting in 1945 and honorably discharged in 1949.
He worked as an Inspector for McCord’s for 20 years, retiring in 1976.
Ernest enjoyed fishing and taking care of a large and productive garden. He was a member of the Plymouth Wesleyan Church and the Farm Bureau.
Ernest is survived by his wife, Alice, two step-daughters and two step-sons. His step- daughters are Linda (David) McCarthy, Michigan City, IN., and Barbara (Robert) Milligan, Lake Park, FLA. His step – sons are Larry (Mary Lee) Stull South Bend, and Roger Stull, Plymouth, IN.
He is survived by nine step-grandchildren, Sherie Netzel, Chris Pischke, Melissa Jackson, Denny Stull, Doug Stull, Darrin Stull, Joe Reitzug, Nick Reitzug, and Mary Beth TeSelle.
Ernest is also survived by 13 Step – Great – Grandchildren.
He was preceded in death by his parents, and a brother, Clarence Shaffer.
Friends are invited to share their memories of Ernest with his family on Sunday, December 6, 2009, at the Johnson-Danielson Funeral Home, 1100 N. Michigan St., Plymouth, from 3 to 6 p.m.
Funeral Services for Ernest will be held in the Plymouth Wesleyan Church, 11203 S. Michigan Rd., officiated by the Rev. John Branch, at 11 a.m. on Monday, December 7, 2009, with calling one hour prior to services.
Burial with full military rites, conducted by the Plymouth American Legion Post 27 and Plymouth VFW Post 1162 will be in New Oakhill Cemetery.
Memorials may be made to the Plymouth Wesleyan Church 11203 S. Michigan Rd. Plymouth, Indiana 46563