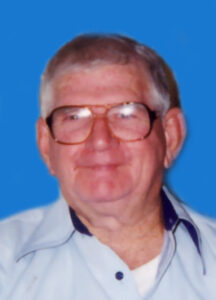 Ernest L. Ronk, 86, of 2403 N. Michigan St., Plymouth, died on November 4, 2008.
Ernest lived in the Marshall County area most of his life. He was born in Plymouth, on September 22, 1922, the son of Thomas and Goldie Lee Cree Ronk. He attended schools in Kokomo, Greentown, Plymouth and Rockfield, IN.
A veteran of World War II and Korea, he served his country in the United States Army.
He was employed at the Smiley Pole Barn Co., and last worked in Culver at the McGills bearing plant in security.
On October 20, 1980, Ernest and Autumn Dove were married in Plymouth. Autumn died on August 26, 2000.
Ernest was an active member with Civil Defense and was a member of the VFW.
Ernest is survived by his good friends, Gail and Lee Sargent.
He was preceded in death by his wife, Autumn, a brother, Forrest Ronk and two sisters Lucille Helton, and Bessie Nolin.
Friends are invited to celebrate the life of Ernest Ronk with his family from 11 to 1 p.m. on Friday, November 7, 2008, in the Johnson-Danielson Funeral Home, 1100 N. Michigan St., Plymouth.
Funeral service, with Pastor Terry Metheny, of the Church of Jesus Christ, Argos, Ind., will be held after visitation on Friday at 1 p.m. in the funeral home.
Military graveside honors at Tyner cemetery, will be accorded to Ernest by the VFW and the American Legion.
Memorial contributions in Ernest’ name may be made to the Riley Children’s Hospital, Indianapolis, IN.