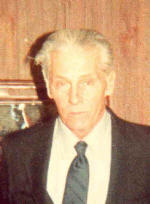 Eighty-three year old Ervin G. Rhodes, a resident at 5000 West 37th Ave., Gary, Ind., having moved there 34 years ago from Plymouth, died following an illness at 11:30 p.m., Friday, December 28, 2001, in Plymouth’s Millers Merry Manor where he had been a patient since Thursday. Ervin was born in Lady Smith, Wis., the son of Clarence and Ruby Rhodes, on April 18, 1918. He attended school in a one-room schoolhouse in Wisconsin. He was first married to Kathryn M. Meek on January 12, 1940 in Bourbon, Indiana, she died in December 21, 1983.
Ervin, a member of the Pentecostal Faith, he pastored a church in Rochester and later worked at Studebaker’s in South Bend for 22 years. A millwright, he then worked for the U.S. Steel Company in Gary for 18 years, retiring in 1983. A hard worker, Ervin enjoyed building houses, a favorite pastime was hunting for herbs especially ginseng. He was a faithful member of The Church of Jesus Christ, Gary, Indiana. Ervin is survived by four sons and seven daughters. His sons are: Nathan J. Rhodes and James G. and Audra Rhodes, all of Plymouth, Calvin J. Rhodes, Koontz Lake, Ind., and Garland G. Rhodes, Indianapolis. His daughters are: Connie Arrequin, Valparaiso, Ind., Alberta and Larry Lines, Chesterton, Ind., Jane K. and Donnie Gillum, Flatwood, Ky., Donna L. Rhodes, N. Judson, Ind., Ruby I. Elam and Aquila Rhodes, both of Westville, Ind., and Lisa Rhodes, Gary, Ind. Twenty-five grandchildren and several great-grandchildren also survive. Ervin was preceded in death by his first wife, Kathryn, two infant daughters: Ruth Elaine and Areatha Rhodes and two other daughters: Lela R. Harner and Pricilla Rhodes and a son Arthur Rhodes. Four brothers also preceded him in death: Arnold, Harold, Carroll and Wayne Rhodes, and one sister, Elsie Heisler. Visitation for family and friends will be on Wednesday, Jan. 2, 2002, from 4 to 8 p.m. in the Johnson-Danielson Funeral Home, 1100 N. Michigan St., Plymouth, Ind., and for one hour prior to services in the church on Thursday. The funeral services for Ervin will be at 11 a.m. on Thursday, January 3, 2002, at the Plymouth United Pentecostal Church – House of Prayer, 12450 Plymouth-Goshen Trail. Pastor Tommy Doughty, of The Church of Jesus Christ, Gary; and Rev. Donnie Gillum, a son-in-law will officiate. Burial will be in New Oakhill Cemetery, Plymouth. Memorial gifts in memory of Ervin, may be made to the House of Prayer, Plymouth or The Church of Jesus Christ, Gary.