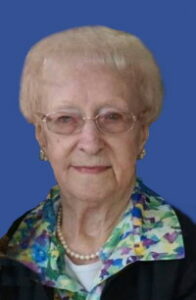 Eskie M. Straka, 102, passed away at 7:42 p.m. on Tuesday, August 20, 2019 at St. Joseph Regional Medical Center- Plymouth Campus. Eskie lived in Cicero, Illinois for most of her life before coming to Plymouth in 2002. The last 18 months, she resided at Pilgrim Manor Nursing Home in Plymouth.
Born in Auburn, Illinois on January 19, 1917, Eskie was the daughter of George and Verna Mae (Myers) Psaute. She graduated from Auburn High School with the class of 1935.
She became the bride of Richard Zahrour on June 3, 1944 in Auburn, Illinois. After her first husbandâ€™s passing, Eskie would later marry Albert J. Straka on May 10, 1963 in Chicago, Illinois.
She worked as an office manager at several businesses including, Florida Fruit Juice Inc., before her retirement.
After moving to Plymouth, Eskie attended First United Methodist Church in Plymouth and was active in the church Womenâ€™s Guild. She especially enjoyed the company of her great-great nieces and nephews.
She is survived by her siblings: Jeanne Middleton of Plymouth, Ruth Psaute of Pontiac, IL and George (Audrey) Psaute of Mesa, AZ; local family who will miss her dearly: Nancy (Robert) Reed of Kalamazoo, MI, Pam Michel of Plymouth and Cindy (Leland) Sellers of Bourbon, Dan (Christine) Sellers, Jacque (Jason) Clinton, Jamie Michel, Crystal (Nick) Jacobson, Isaac (Holly) Sellers, Scott (Allison Berger) Michel, Victoria Reed and Susan (Lisa) Reed; and many great-great nieces and nephews.
Eskie was preceded in death by her parents, her two husbands, and siblings: Parker, Victor, Herbert, Dorothy and William (Little Billy).
Visitation will be held on Monday August 26, 2019 from 10-11 a.m. in the Johnson-Danielson Funeral Home, 1100 N. Michigan Street, Plymouth. Funeral services will follow at 11 a.m. with her great-niece, Rev. Crystal Jacobson officiating.
Burial will be in the New Oak Hill Cemetery, Plymouth.
Memorial contributions can be made to the First United Methodist Church, 400 N. Michigan Street, Plymouth, IN 46563.