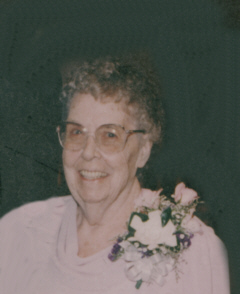 The Chicago White Sox have lost one of their most enthusiastic fans. In an interview in 2005, she is quoted as saying that she had been “a fan forever.”
Esther E. Oliver, 94, died of natural causes in Pilgrim Manor, Plymouth, on Friday, Nov. 5, 2010, at 12:10 p.m. Born in Chicago, Esther was the daughter of Axel and Tekla Tengelin Carlson Larson.
Raised in Mount Greenwood, Ill., she went to the Mount Greenwood school through the 8th grade. She dropped out of school during the Great Depression to get a job as a nanny for a local family.
Esther said that she “had lived a wonderful life and lived in interesting places without ever learning to drive a car.”
She had known Adam Oliver’s family for years. He went to the same school, but was four years ahead of her. His sister got them together and on June 24, 1933, they were married. Esther told everyone that she married an old man.
The newlyweds both worked in a feed store. Together they were paid $8 a week.
In 1937, their only child, Janice “Jan” Badell, was born in the same home where Esther was born 22 years before.
Esther and Adam bought their first home for $2,800 and paid for it by the month. She was thrilled that the house had running water and an inside toilet. They had a big garden and Esther canned and froze his vegetables. The couple loved to fish together and eventually built a vacation home in Freemont., Wis., moving there because the bass fishing in the White river was so excellent.
In 1978, with Adam’s health deteriorating, they moved to Plymouth to be near their daughter, Jan and her husband, Dr. Douglas Badell and their family.
Adam who’d had open heart surgery, died at age 89 of prostate and bone cancer in 2000. They had been married for almost 67 years.
Esther loved and was very proud of her husband and her family. They were her whole life.
She was preceded in death by her parents and her beloved husband.
Surviving are her daughter and son-in-law, Dr. Douglas and Janice Badell, of Plymouth and a grandson and his wife, Dr. Jeff and Lisa Badell, Plymouth: two granddaughters: Dr. Kim and Dr. Brad Wilson, Jasper, Ind. and Pam and Jim Fasteen, Louisville, Ky.
Nine great-grandchildren also survive. They are Jillian Badell, Jay Badell and Olivia Coulter: Brant, Hailey and Pete Wilson and Tess, Jack and Chet Fasteen.
Friends may visit with the family on Saturday, Nov.13, 2010, from 11 to 1 p.m. at the Johnson-Danielson Funeral Home, 1100 N. Michigan St., Plymouth.
Funeral services for Esther will be held at the funeral home following visitation at 1 p.m. The Rev. Charles Krieg will officiate.
Burial will be in New Oakhill Cemetery.
Memorial gifts may be made in Esther’s memory to the First United Methodist Church 400 NOrth Michigan Street Plymouth, Indiana 46563, where she was a member, or to the Marshall County Humane Society P.O. Box 22 Plymouth, Indiana 46563