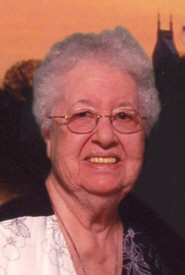 Esther G. Hardy, 80, formerly of 805 Baker Street, passed away at 8:30 a.m. on Sunday, June 23, 2013 in Pilgrim Manor, Plymouth.
Born in San Bernardino, California on January 14, 1933, she was the daughter of Gus Peter and Nellie Jane (Whiting) Poulos. She graduated from San Bernardino High School in 1950.
Esther married James D. “Jim” Hardy in San Bernardino, California on February 25, 1951. She attended Ivy Tech College and became a dietician. Esther worked as the food service supervisor for Greenlawn and Pleasant View Nursing Homes. She retired from Bremen Healthcare in 1993.
She was a member of REACT, the Clover Leaf CB Club and of the Marshall County Civil Defense. She volunteered on the Marshall County Red Cross Disaster team. She also had donated numerous gallons of blood to help others.
Esther loved crocheting blankets for all her grandchildren, knitting and embroidering. She was an avid reader of romance novels. She and Jim would also travel around the country for air shows.
Her husband of 52 years, Jim preceded her in death on April 11, 2003.
She is survived by her sons and a daughter: Ronald D. (Laurie) Hardy and Marvin D. (Jodie) Hardy, both of Plymouth, Steven R. (Carla) Hardy of Carmel, IN, and Yvonne (Jerry) Rindfield of Bremen; 16 grandchildren and 31 great-grandchildren.
Esther was preceded in death by her parents, infant daughter, Diane E. Hardy, and siblings, T. Gus Poulos and Ruth Wright.
Visitation will be from 5 – 8 p.m. on Wednesday, June 26, 2023 at the Johnson-Danielson Funeral Home, 1100 N. Michigan Street, Plymouth.
Funeral services will be on Thursday, June 27, 2013 at 11 a.m. in the funeral home.
Burial will be in New Oakhill Cemetery.
Memorial contributions can be made to the United Way of Marshall County’s 5 Star Program P.O. Box 392 Plymouth, IN 46563-0392.