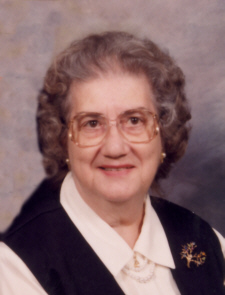 Esther Lois (Bolinger) Reed passed away in her home, 305 Marigold Court, Plymouth, at 11:20 a.m. on October 17, 2007, 16 months after her diagnosis of pancreatic cancer. She fought courageously and without complaint, ending her battle while in the loving care of her family.
Born November 23, 1927, in Blue Island, Illinois, Esther moved with her family to Argos in 1936, graduated from Argos High School in 1945, and lived in Marshall County thereafter. She was preceded in death by her parents, O. Earl and Lois E. (Oyler) Bolinger, brother Ora R. Bolinger (World War II) and oldest son, Phil Earl Reed on March 20th, 1990.
Esther was married to James Roy Reed on June 5, 1949, in the Walnut Church of the Brethren. She is survived by her husband Roy of 58 years. Six children also survive. They are: Gloria F. (Kevin) Nelson, Indianapolis: Michael L. (Stacie) Reed, Plymouth: Donald R. (Vickie) Reed, Argos: Marlin K. (Tari) Reed, Plymouth: Mark A. Reed, South Bend: Robert E. (Cindy) Reed, Indianapolis: sister Doris (Robert) Kingsafer at South Bend: and brother Edward H. (Peg) Bolinger at Wheaton, Illinois.
Also surviving are eight grandchildren: Stephen Nelson, John (Adrian) Reed, Gina (Robert) McMillen, Andrew Nelson, Ryan Reed, Jennifer (Frank) Wills, Clint (Leslie) Reed and Matthew Reed.
She was also great-grandmother to Lilianna and Dayton, step-grandmother to Kyle, Ryan and Maicee and three step-great-grandchildren and Aunt Esther to many nieces and nephews.
After obtaining an Associates Degree in Business from Manchester College, Esther worked as a legal secretary for the State Exchange Bank. She retired in 1986, as secretary to the president of the Culver State Exchange Bank. Esther then worked in the office for A Homestead Shoppe in LaPaz for 18 years, retiring in October, 2006 when her illness made it difficult to continue. Esther served on the Union-North United School Board for eight years.
Roy and Esther enjoyed many years together traveling, driving through the country and dining out
Esther was an avid reader, always willing to share her many books. She enjoyed the many flowers and birds in their yard. She was an excellent cook, known by many for her chocolate chip cookies. She will be remembered as a devoted wife, loving mother, sister and aunt, a special friend, mentor and example of faith, courage and quiet strength to many.
Friends may visit with the family from 2 – 8 p.m. on Saturday, October 20, 2007, in the Johnson-Danielson Funeral Home, 1100 N. Michigan St., Plymouth, and for one hour prior to the 2 p.m. services at the Walnut Church of the Brethren in Argos, on Sunday, October 21, 2007. Pastor Robert “Bob” Rice will preside.
Burial will follow at the Walnut Church of the Brethren in Argos.
Memorial contributions may be made to the Philip E. Reed Scholarship Fund c/o the LaPaz Lions Club, 4291 Michigan Road, Plymouth, Indiana 46563, the Marshall County Center for Hospice and Palliative Care or the Juvenile Diabetes Research Fund.