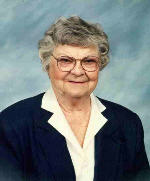 Esther L. Shaffer, 82, Shalley Drive., Plymouth , passed away at 11:45 a.m. on Wednesday, June 5, 2002. Esther had been in failing health for the past year; she died in Saint Joseph Regional Medical Center, South Bend . Born in Bourbon, Ind., on Aug. 6, 1919 , she was the daughter of Lawrence and Pearl A. Miller Grossman. She was a life-long resident of Plymouth, graduating from Inwood School and Lincoln High School in 1937. Putting her high school training in bookkeeping and secretarial skills to work, she was employed at Keiser Gypsum in Chicago for four years while her fiancé, Robert “Sam” Shaffer served in the United States Army during World War II. Sam and Esther were married on April 21, 1946 , in Plymouth . In Dec. of 1947, became the proud mother of their only child, a daughter, Elizabeth, lovingly called Beth. From that time on, she devoted her entire life to the happiness and welfare of her husband and child. Her beloved Sam died on Aug. 26, 2001 . Esther’s love for people and her service to them was evident in her secretarial responsibilities at the Plymouth Office Supply, the Marshall County Clerk’s office, the Bureau of Motor Vehicles, the County Highway Department and the Shaffer Construction Company. A tireless worker, she served the public well with her expertise and her cheerful personality. She also worked as a volunteer with Bonnie Yeazel at the Child Daycare Center of Plymouth and for over 15 years at Miller’s Merry Manor and most recently with the Marshall County Red Cross. She always enjoyed being with friends, especially “the Golden Girls,” a lunch group. She enjoyed knitting and loved a good game of Gin Rummy. Esther is survived by her loving daughter, Beth and her son-in-law, Dick Webster, Bremen . Her grandson Michael Shively, his wife Paula, and their children, Seth and Morgan, all of Plymouth, survive as well. Several nieces and nephews also survive. Esther was preceded in death by her parents and her spouse. Visitation with her family will be from 4 to 8 p.m. on Saturday, June 8, 2002, in the Johnson-Danielson Funeral Home, 1100 N. Michigan St., Plymouth, Ind. Funeral services will be at 2 p.m. in the funeral home on Sunday, June 9, 2002. The Rev. Brian Deckinger, pastor of the Immanuel Lutheran Church, Donaldson, where Esther was a long time member, will officiate. Burial will be in New Oakhill Cemetery . Memorial gifts in Esther’s memory may be made to the Immanuel Lutheran Church or the Marshall County Red Cross.