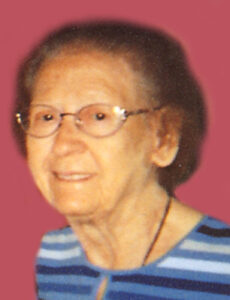 Esther Virginia Wagoner, 92, passed away at 3:55 a.m. Monday, May 20, 2013 in the Catherine Kasper Life Center, Donaldson. Formerly of Bremen, Esther moved to Plymouth in 1996.
Esther was born one of nine children to Edward Francis and Ethel May (Dodd) Walterhouse on March 1, 1921 in Bremen, Indiana.
She graduated from Bourbon High School in the class of 1938.
On February 10, 1938, in Vincennes, Indiana, she married Earnest W. Wagoner. He preceded her in death on November 20, 1986.
Esther worked for Bremen Bearings, Inc. for over 36 years as an inspector.
She was a 50 year resident of Bremen and a lifetime member of the Riverside United Methodist Church, where she had served in her younger years as a Sunday School teacher. Esther also participated in many food drives for the church, and was responsible for many home cooked meals for her church family.
Esther enjoyed her family and they enjoyed her great Sunday dinners. She never missed birthday greetings for her nine grandchildren, eighteen great-grandchildren and eight great-great grandchildren.
She will also be remembered for card games like Skip-Bo, Euchre and Pinochle and being an avid reader. Esther had enjoyed traveling with her husband and spending some winters in Avon Park, Florida.
Surviving family members include her three children: Sandra Boberg of Bremen, David (Kay) Wagoner of Plymouth and Dennis Wagoner of Ohio, her nine grandchildren: Tonda Ellis, Todd Wagoner, Tori Wagoner, Rodney Fehr, Sheri Gingerich, Tammy Hundt, Cory Fehr, Kyle Wagoner and Kelly Wagoner and her eighteen great and eight great-great grandchildren.
Two sisters also survive, they are: Ruth Fox of Wakarusa and Marian Tharp of Plymouth.
She was preceded in death by her husband Earnest and six siblings, they are: brothers; Donald, Harry and Gerald Walterhouse and sisters; Mildred Jones, Helen Morlan and Jessie Price.
Visitation will be held on Wednesday, May 22nd from 4 – 7 p.m. in the Johnson-Danielson Funeral Home, 1100 N. Michigan St., Plymouth. Services will be held in the funeral home on Thursday at 10:30 a.m. with Pastor Gail Law officiating. Burial will follow in the Bremen Cemetery.
Memorial gifts to the Riverside United Methodist Church, Bremen, Indiana.