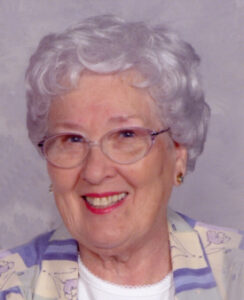 Ethel Robinson, 81, lived in Osceola, Ind., all of her life, until moving to Riverwalk Retirement Homes in Oct. of 2010. She died of natural causes at 6:16 A.M. in Miller’s Assisted Living on Saturday, August 27, 2011.
Ethel was born on April 30, 1930, in New Carlisle, Ind. She was the daughter of Randall Draper and Sophia Lorene Brothers Draper.
She attended Osceola School and then her high school years at Mishawaka High School graduating with the class of 1948.
On Oct. 29, 1950, in the Osceola Methodist Church, Ethel and Kennedy Robinson, high school sweethearts, were married. They would have celebrated their 61 wedding anniversary this coming October.
Ethel worked for 40 years in the Bendix Mishawaka plant. She retired as an Executive Secretary on her birthday in 1992.
For many years, Ethel was a May Kay representative. An excellent seamstress, she made many of her own clothes in her younger years.
She was an avid reader and camper. She and her husband started camping in 1965, and camped all over the country. For many years, 1993 to 2010, they wintered in Arizona. She was a big Notre Dame fan and followed Ryan Newman’s race car triumphs enthusiastically.
Ethel was a member of the Osceola United Methodist Church for over fifty years.
Ethel is survived by Kennedy, her devoted husband, Plymouth and by their son and daughter-in-law, Kennedy “Ken” and Sharen Robinson, also of Plymouth.
Also surviving is a grandson, Brian Robinson and his fiancée, Sarah Keefe, both of Plymouth and a granddaughter, Jennifer Robinson of Indianapolis. A sister, Eleanor (Ed) Gindelberger, Dayton, Ohio, and numerous cousins survive as well.
Ethel was preceded in death by her parents.
Friends are invited to meet with Ethel’s family on Wednesday, August 31, 2011 from 4 to 7 p. m. in the Johnson-Danielson Funeral Home, 1100 N. Michigan St., Plymouth.
Funeral services for Ethel will be in the Chapel Hill Mausoleum, Chapel Hill Memorial Gardens, 10776 McKinley Avenue Osceola, Indiana at 1 p.m. on Thursday, Sept. 1, 2011, with calling from noon to 1p.m.
Entombment will be in the Chapel Hill Mausoleum.
Memorial gifts in Ethel’s name may be made to the American Cancer Society.