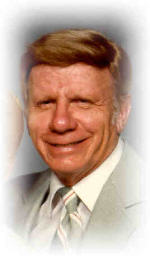 Eugene E. “Gene” Burns, 77 a Lake of the Woods resident the past 24 years, has died following a long term illness. Gene, who resided at 4536 W. Shore Drive, Bremen, died at 1:40 a.m., Saturday, November 2nd at Hospice House of St. Joseph County, South Bend, with his loving wife and family at his side. A former resident of Dalton , Ill. , Gene was born October 1, 1925 in Chicago to Edward P. and Mildred J. Sahs Burns. In Chicago he attended St. Theodore’s Grammar School and graduated from St. Rita High School in the Class of 1943. A United States Navy Air Corp. veteran of World War II, Gene served his country in the South Pacific from 1943 to 1946. Gene was a self made man, who was known for getting the job done. He began his working career as a truck driver, for Freer Motors of Chicago and worked his way to manager. During that time, he was presented the challenge of transporting the U505 German submarine for display at the Chicago Museum of Science and Industry, where it remains today. He was then named General Manager for Jay Bee Cartage of Chicago , later he missed the independence of operating his own rig and began driving for the General Electric Co. and locally for Aker Plastics and Chase Leasing until his retirement in 2001. Over the past 18 years, Gene shared his life and spiritual convictions with Lucille A. Rzonca-Rentz Burns, with whom he exchanged the vows of Holy Matrimony on May 12, 1984 at St. Patrick’s Catholic Church in Walkerton, Ind. Together they enjoyed time close to home with family and friends. Mechanically inclined in many ways and willing to respond, he assisted with repairs and maintenance at St. Patrick’s Church and School, helped construct the Lake of the Woods Community Building and was keeper of the lake buoys. Gene was a current member of St. Michael Catholic Church, Plymouth . He is survived by his devoted wife, Lucille, two daughters; Jeanne I. Krasowski of Willow Springs, Ill. , and Irene M. “Renie” (Don) Drage of Peachtree, Georgia. Gene’s twin sister Eileen M. (Phil) Wengel of Alsip , Ill. and one brother Gerald E. (Katherine) Burns of South Holland , Ill. also survive. Grandchildren include; Jeffrey J. (Beth) Krasowski, Jason J. Krasowski, Justin J. Krasowski, John A. Drage and Tod Drage, along with great granddaughter Lauren Ann Krasowski. Gene’s step-daughter Lynn Marie Rentz of Schererville , Ind. and children; Michelle, Pamela and Eddie Myers survive as well as many nieces, nephews and friends. Proceeding in death were his parents, a sister and brother-in-law, Bernice E. and Bill Englert, and a son-in-law Jerome Krasowski. Visitation will be held on Friday, November 8th from 2 – 9 p.m. (EST) in the Johnson-Danielson Funeral Home, 1100 N. Michigan St. Plymouth , where a Rosary will be said at 8 p.m. The Mass of Christian Burial will be at 9 a.m. (EST) Saturday, November 9th in St. Michael Catholic Church, 625 N. Center St. Plymouth . Father Robert Dombrowski Pastor of St. Dominic Church, Bremen and Father William Kummer, Pastor of St. Michael Church, Plymouth will concelebrate the Mass. A graveside service will be held at 11:30 a.m. (CST) in St. Mary Cemetery , Evergreen Park , Ill. , where military honors will be accorded Gene. Memorial gifts in Gene’s memory may be made to Hospice of St. Joe/ Marshall County, 112 S. Center St., Suite C, Plymouth, IN 46563 or Dr. Navari Cancer Center,1915 Lake Ave., Plymouth , IN 46563